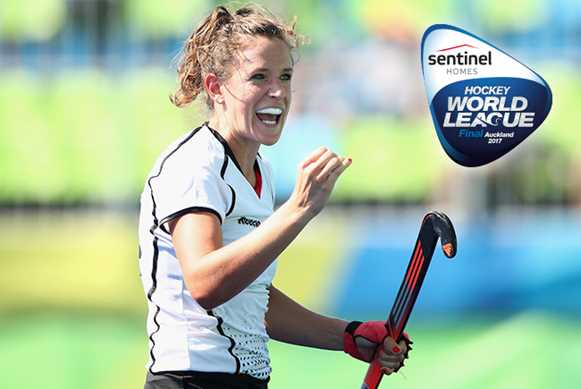 Germany's Janne Müller-Wieland is an optimist and a pragmatist, both qualities that are helpful when your national coach of five years announces he is moving on to become Head Coach of the China women’s team.

Not that Janne is anything but complimentary about the departed Jamilon Mülders. “Everyone understands why Jami had to make the move and we all hope he does well,” says the German captain. “Selfishly we were thinking about what this could mean for us as players. Jami has this great skill for communicating with people and he is very empathetic. It will be interesting to see how he gets on in China…”

Janne lets the sentence trail before brightly switching to the topic of Mülders’ replacement. “Xavier Reckinger is a great appointment. I was dreading what it could mean for us because it all happened so quickly [Mülders announced his resignation after the EuroHockey Championships in August], so it was good that the DHB [German Hockey Association] was able to find someone of Reckinger’s abilities.”

Reckinger certainly has pedigree. He played for his home country Belgium more than 300 times and was a successful coach with the Belgium Under-21 team amongst others. He has also been working with the German women’s team since February and knows how the team works and how Mülders had structured coaching to get the best out of his limited time with the squad.

Janne hopes that the learning phase will be both quick and successful. Germany has form in this area. When Mülders took over in 2013, the German team instantly won EuroHockey gold and they have been picking up medals ever since – bronze at the 2015 Unibet EuroHockey Championships, bronze at the Rio 2016 Olympics and a second place finish at the Hockey World League Semi-Finals in Johannesburg, thus securing their qualification to the 2018 Hockey Women's World Cup, London 2018.

“If you take away my caps, the average number of caps in our team would be, what, 20?”
Janne Müller-Wieland, Germany

For Janne and her team, the forthcoming Sentinel Homes Hockey World League Finals in Auckland, New Zealand will be an extra special event as it will be the first time the team has really come together under their new coach. With the Bundesliga taking priority in the autumn months, the team will leave for Auckland a week before the Sentinel Homes Hockey World League Final starts and those ensuing seven days will be a period of extensive team building.

The squad is missing some players through injury – Jana Teschke has torn her cruciate ligament and will be a big loss – and the new coach has also brought in some very young players. Camilla Nobis is just 18, Hannah Granitzki 20, Selin Oruz 20 and, laughs Janne, “if you take away my caps, the average number of caps in our team would be, what, 20?”

While Germany might be missing training time together, they certainly do not miss out on competition. The Bundesliga is one of the most competitive domestic leagues in the world and, when the players of the national team square up to each other, there are no holds barred. “We literally smash each other on the pitch,” says Janne. “Yes, we might be best friends on the national team but there is nothing left behind when we meet in the league.”

It is one of the reasons Janne is not disappointed that Germany does not have a centralised programme. “Sure, it would be nice to have some time together and it is hard to keep up with all the centralised teams, but our way also has advantages - for me only training with the national team all the time would not work. I like our hockey culture, the competition of club hockey and I like the balance my job and private life (in the city I want to live in) offers me.”

When it comes to the opposition awaiting the team ranked seventh in the FIH Hero World Rankings, Janne is slightly dismissive. “To be honest, I believe everyone is still in the process of change in a way. The Netherlands and Argentina, ranked one and two in the world, will probably be the favourites for the Hockey World League Final. England are working hard and will be working even harder, if that is possible, in the build up to the World Cup in London.

“Australia and New Zealand might be back on track because they have just had the Oceania Cup and their own domestic seasons, which will have sharpened them up. New Zealand, with the home crowd behind them, will try to defend their silver medal from the last Hockey World League Final. And China, well that will be an interesting one. They have a lot of potential but it is whether Jami can bring that out.”

England will be Germany’s first opponents in the Hockey World League Final, with Argentina and Mülders’ China their other pool B competitors.