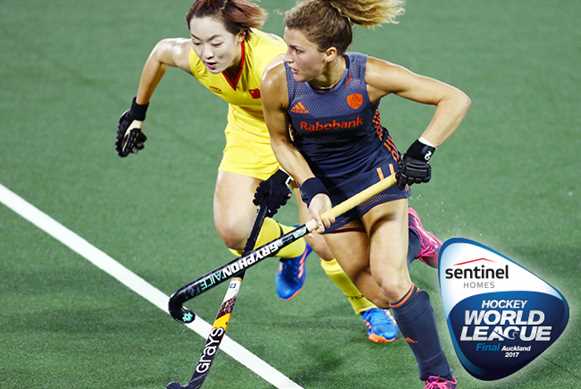 Netherlands and England could now meet in the Final after their wins today Photo: FIH/WSP

England defeated USA 2-1 whilst Netherlands won 4-0 against China to secure their place in the semi-finals of the Sentinel Homes Women’s Hockey World League Final 2017 being held at Harbour Hockey Stadium in Auckland, New Zealand.

Their wins confirmed the semi-final line-up which will see England take on hosts New Zealand on Friday at 20:15 and Netherlands play Korea on Saturday at 20:15.

The quarter-final losers will also play off in classification matches, with Argentina taking on Germany on Friday at 18:00 while USA will play China on Saturday, also at 18:00.

The first quarter-final of the day saw England come up against USA, a team they lost to only a few months ago in the Hockey World League Semi-Final in Johannesburg, South Africa.

England dominated the first two quarters with captain Alex Danson and Lily Owsley’s dynamic understanding in the attacking half proving a real handful for the American defence. Owsley’s strength and speed on both flanks was telling whilst Danson’s ability to steal possession and work the ball in small areas had their opposition back-pedalling.

It was from one of the Danson - Owsley forays that England scored the only goal of the half. In the seventh minute Owsley drove down the left, Danson worked her magic in close confines and slipped the ball across the face for Sophie Bray to score with her reverse hit.

Maddie Hinch in England’s goal had to wait until the 29th minute to touch the ball, an important block from Erin Matson’s drive in the context of the score, which kept the match 1-0 to England going into the half-time break.

In the third quarter, USA forced two penalty corners in the opening minutes but could not convert. England then swept back on attack and increased their lead in the 41st minute with another well worked goal.

From the baseline, this time from the right, Olivia Page passed to Elena Rayer who was able to find a gap behind the deep USA defence for Sophie Bray to tap in her second of the game to make it 2-0.

In the 54th minute USA earned another penalty corner, their third of the game. Michele Vittese looked to drag flick but neatly laid the ball to captain Melissa Gonzalez who took a couple of steps in and found a gap low past goalkeeper Maddie Hinch’s right to make the last few minutes a bit more frantic than England would have liked.

England’s team structure, accurate passing and trapping denied USA the ball for much of this match but USA kept running hard - desperate for an opportunity to get on equal terms. England however were too good and saw out their victory.

Speaking afterwards, England’s double goal-scorer Sophie Bray said: “It was a solid defensive performance from us. USA got a late goal and I was proud of how we defended after that. We definitely had good control of the match.”

USA Captain Melissa Gonzalez said: “I thought England came out really strong. They played the entire game really strong. They were really well-connected as a unit - they were tough on the ball – we only showed up in the second half. Sometimes we joke that we run out of time, but we are always in a match.”

In the second quarter-final of the day Netherlands Xan de Waard earned her 100th cap and played an important role in her team's victory.

China started the match in full blown defensive mode as Netherlands mounted sustained attacks. And it wasn’t long before the European champions opened the scoring, with Lidewij Welten searing in from the left flank to send her team 1-0 ahead.

In the 23rd minute Netherlands captain Marloes Keetels pounced on a pass, cleverly jinked the ball in and scored to double the lead for the world’s number one ranked team.

As the game progressed into the third quarter, China forced their first penalty corner, but a brilliant Marloes Keetels aerial save on the post kept the Dutch defence intact.

“The Asian sides are very quick. They just keep running and are very good at defence. We are very excited for the semi- final but we will have to be at our best.”
Marloes Keetels, Netherlands

The Netherlands got their third goal in the 51st minute when Caia Van Maasaaker scored a direct drag flick low to goalkeeper’s Li Dongxaio's left. Five minutes later Frederique Matla finished off a Dutch baseline dribble to make the score 4-0 and qualify them for the semi-finals.

Speaking afterwards, Netherlands captain Marloes Keetels said: “I think we played very well. We were very effective at the penalty corners, scoring many goals. I am very proud of the team – I’m just very happy to be in the semi-final. We had a lot of goal-scorers and worked well together as a team today. The defence kept a clean sheet which is another positive from our performance.”

On playing Korea in the semi-final, she added: “The Asian sides are very quick. They just keep running and are very good at defence. We are very excited for the semi- final but we will have to be at our best.”

China goalkeeper Li Dongxiao said: “We can play better than this. Our team is young and every game we learn more and gain experience. But Netherlands certainly gave us a lot of work to do tonight!”