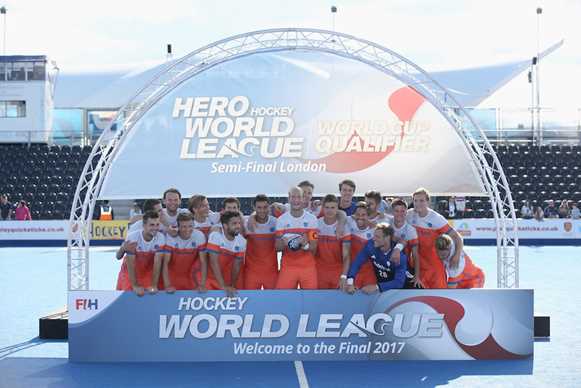 London, England: The Netherlands are the winners of the Hero Hockey World League Semi-Final, storming to a 6-1 victory over Rio 2016 Olympic gold medalists Argentina in a wonderful event final at the Lee Valley Hockey & Tennis Centre on Sunday (25 June).

Valentin Verga scored two high quality goals in the first quarter and the Dutch never looked back, with Thijs van Dam, Robbert Kemperman, Mirco Pruijser and Thierry Brinkman all on target before Matias Paredes scored a late consolation. The Netherlands were simply superb in the match, playing with a relentless energy that caused Argentina problems throughout. It was a performance that defender Mink van der Weerden was particularly pleased with. “For us it was a really good win and another step forward. That’s the most important thing.”

Argentina’s Gonzalo Peillat took home both the Hero Best Player and Hero Top Scorer awards, with his tally of 12 goals clearly turning the heads of a voting panel that included the team coaches and members of the broadcast and written media. Dutchman Thierry Brinkman was named as the Best Junior Player, for athletes aged 23 and under.

Ahead of the memorable final, home favourites England gave a big crowd plenty to cheer about with a 4-1 victory over Malaysia in the 3-4 classification match. A third place finish here in London means that England have qualified for the Odisha Hockey World League Final 2017, joining Netherlands, Argentina and hosts India at the event in Bhubaneswar, with the remaining four places being finalized upon the completion of the forthcoming Hockey World League Semi-Final in Johannesburg, South Africa. Harry Martin finished off two penalty corners either side of a wonderfully worked field goal from birthday boy David Ames, putting England 3-0 up at half time. Faizal Saari’s superb close range deflection reduced the deficit with seven minutes remaining, but team captain Phil Roper killed the game in the dying stages to give Bobby Crutchley’s team a third place finish on home soil.

“We played well and dominated throughout”, said England midfielder Barry Middleton. “We played some aggressive, attacking hockey but at 3-0 didn’t quite find the fourth to kill it off. But we were always in control. They’ve had a good tournament, but after a disappointing day yesterday, we picked ourselves up. And it was fun!”

Perhaps the most surprising result of the day came in the 5-6 classification match, with Canada upsetting the FIH Hero World Rankings to defeat India 3-2, guaranteeing their place at next year’s Odisha Hockey Men’s World Cup Bhubaneswar 2018. India – who defeated Canada 3-0 in the pool phase – dominated for long spells but it was the Canadians who emerged triumphant, battling back from 2-1 down to take the victory thanks to strikes from Keegan Pereira and Gordon Johnston, who had also opened the scoring earlier in the match before a double from Harmanpreet Singh put India in charge. Goalkeeper Antoni Kindler was the star of the show, making numerous world class saves to give Canada a superb victory over their illustrious opponents, claiming that all important fifth place finish in the process.

Keegan Pereira, scorer of Canada’s second goal said: “Obviously it was a tight game. We have not played particularly well against India since Rio. But we followed the game plan and didn’t sit back as much as we did in the first [pool] game [against India] and put pressure on them. Once we got goals on the scoreboard we knew we could hold on to that lead.”

In the opening match of the day, Pakistan secured a seventh place finish in the competition with a 3-1 victory over China. Muhammad Umar Bhutta scored twice in the match, with Muhammad Irfan Jr. also on target. China matched the Green Shirts for long periods of the match, but Pakistan’s three goal burst between the 51st and 56th minutes proved too big a margin for their opponents to overcome, with Guo Xiaoping netting a late consolation goal.