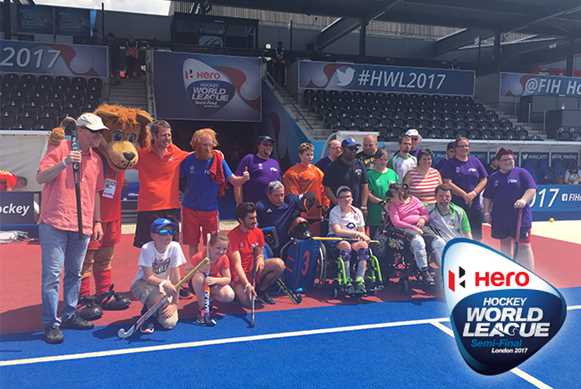 With the number of disabled people who take part in sport having grown significantly in recent years, England Hockey have been leading the way in providing hockey playing opportunities with an emphasis on inclusion and participation.

The event promotes inclusivity, aiming to get everyone of all ages and experience involved. Various branches of the Flyerz came down for the day, Wendy Russell from Brighton Flyerz Hockey Club specialises in deaf hockey, stating ‘it’s to get everyone, regardless of your disability, just to play’.

Hannah Dobbin from the Waltham Forest Flyerz Club spoke about setting up the branch, realising that her club ‘had a youth section, adult beginners and we thought there was something missing here’.  The Waltham Forest Flyerz group began in 2011 and has gone from strength to strength since.  The aim is to get everyone playing, learning skills and enjoying the game, and, ultimately, ‘getting to play in what would be mainstream hockey’.

Shane, a player from the Waltham Forest Flyerz, joined at 17 when the team first began. His previous enjoyment of other sport, including being a keen sprinter, transferred to the hockey pitch where he found he ‘was quite good at it from the start’.  Travelling to Holland to play, he was awarded captaincy and has retained the position since. From then, he has achieved both Level 1 Coaching in Hockey and Level 3 Sport Coaching. As well as joining the men’s team five years ago, he has also become part of the coaching team.  He commented ‘‘I think I prefer coaching because it helps the next generation come through. When I can’t play anymore someone else can take over.’

Access Sport play a vital role in ‘supporting community clubs and helping them open their doors’ to people with disabilities. Hayley Barton, Programme Leader from the Access Sport’s Ignite programme discussed how the wider programme is currently supporting just under 40 sports clubs to become more inclusive, covering a wide range of sports including athletics, climbing, football and sailing as well as hockey. Barton commented that ‘hockey communities are so friendly and welcoming of everyone and anyone and that’s why the disability work has really taken off.  The aim is to see it in every club across the country – that’s the goal’.