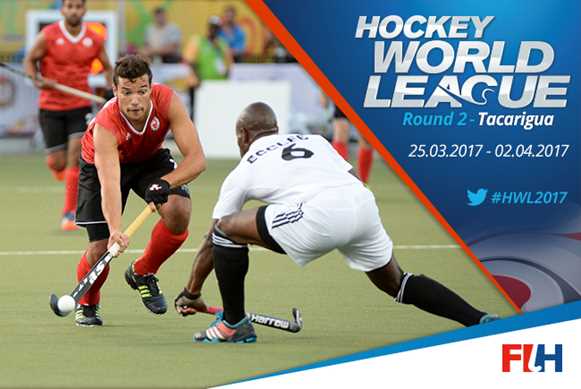 Last chance for men’s teams to qualify for Semi-Final phase, where World Cup tickets are on the table

This Saturday, the third and final Round 2 event of the men’s Hockey World League will get underway in Tacarigua, Trinidad & Tobago.

The eight-team competition, which takes place between Saturday 25th March and Sunday 2nd April, will see Canada, Japan, Russia, Chile, USA, Switzerland, hosts Trinidad & Tobago and Barbados battling for a top two finish to guarantee a place in the Hockey World League Semi-Finals, where those coveted berths at the Hockey Men's World Cup 2018 in India are up for grabs.

Like all the Round 2 events, the competition in Tacarigua – which is located around 20 kilometers inland from capital city Port of Spain - will witness a clash between teams that came through the first phase of the competition against sides that were automatically given a bye through to Round 2 due to their higher placement in the FIH Hero World Rankings. The highest ranked teams will enter at the Semi-Final stage of the Hockey World League which will take place in this summer.

The competition will feature two pools of four, with the finishing positions at the end of the pool phase determining the line-up for the quarter-finals, which begin on Thursday 30th March.

In Pool A, Canada (FIH Hero World Ranking: 11), Chile (WR: 26), USA (WR: 29) and Barbados (49) will all go head to head. Although Canada’s Red Caribous will be regarded as favourites, midfield star Sukhi Panesar is taking nothing for granted.

“The HWL competition can sometimes prove to be challenging as we face teams we may not be as familiar with,’ said the 23-year-old Rio 2016 Olympian in conversation with the Pan American Hockey Federation (PAHF). ‘With the significance of qualifying for either the World Cup or Olympics, the pressure is magnified and each result becomes that much more important.”

Canada have named a strong side for Tacarigua, with star defender and penalty corner expert Scott Tupper captaining the team.

Chile are the second highest ranked team in Pool A and come into the event full of confidence from their first place finish at the Round 1 competition in Chiclayo, Peru. The team won all five of their matches to top the standings, scoring 44 goals without conceding. Ignacio Contardo and Mathias Dummer each netting seven goals in the tournament victory, providing clear evidence that they have plenty of firepower at their disposal.

Both USA and Barbados qualified for Round 2 thanks to strong performances in Round 1, with the Americans winning Round 1 in Salamanca, Mexico ahead of second placed Barbadians. The two sides face each other on two occasions in that competition, with USA emerging victorious in both, something that Barbados will be keen to rectify here in Tacarigua.

Japan (WR: 16) are top ranked side in Pool B but are likely to face stern challenges from Russia (WR: 22), Switzerland (WR: 30) and home favourites Trinidad & Tobago (33). Japan’s campaign at the 2016 Men’s Asian Champions Trophy in Kuantan, Malaysia last October ended in a disappointing sixth place finish, but a ray of light came from the performances of striker Kenta Tanaka, who scored six times – five from open play – to finish second in the scorer’s charts at that event. Tanaka has been selected for the competition in Tacarigua could well be hoping that his goals can fire his team into the World Cup qualification phase of the Hockey World League.

On paper, Russia could well be Japan’s strongest challengers in the pool, with veteran defender Evegenii Mokrousov captaining the team. Mokrousov lead Russia through their Hockey World League campaign in 2014-15, where a fourth place finish at the Round 2 event in San Diego, USA was not quite enough for them to progress to the next phase.

A third place finish at the Round 1 competition in Glasgow, Scotland proved to be good enough for Switzerland to qualify for Round 2, where Jan Hödle top scored for the team with three goals.

Hosts Trinidad & Tobago may be the lowest ranked team in the pool, but according to team captain Darren Cowie, they are confident of their chances. “I think probably acceptable is a fifth-place finish, judging from rankings, preparation and the fact that we are the only team that has not had a international match in preparation”, said Cowie in an interview with the Trinidad & Tobago Daily Express.  “Despite all that, we are better prepared tactically and we are aiming for third spot.”

At the age of 39, Trinidad & Tobago’s Kwan Browne may be the second oldest player in the competition - behind USA's Paul Singh, who is three months older - but he is still capable of producing match-winning moments of brilliance.

The top two finishers from the men’s Round 2 events in Dhaka (4-12 March 2017), Belfast (11-19 Mar 2017) and Tacarigua are certain to qualify for the Hockey World League Semi-Finals, being joined in the World Cup qualifier phase by the two highest ranked of the third placed finishers from those three events.  Malaysia and China took the top two places at the event in Dhaka, with Egypt (WR: 20) finishing in third place. In Belfast, Ireland claimed a first place finish ahead of France, with Scotland (WR: 27) taking third position.