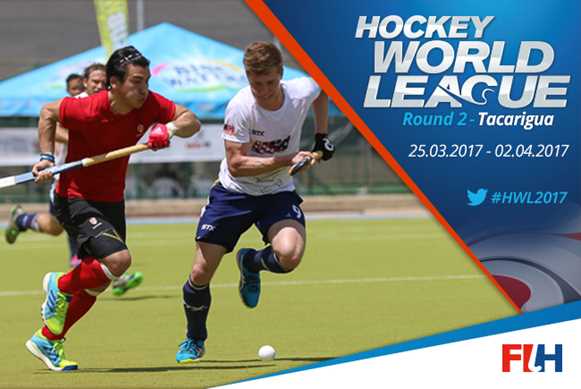 Canada and Japan impress on Day 1 in Tacarigua

Canada (FIH Hero World Ranking: 11) got their FIH Men’s Hockey World League Round II campaign off to a solid start in Pool A with a 4-2 victory over neighbours USA (WR: 29) on Saturday (25 March 2017) at the National Hockey Centre, Tacarigua, Trinidad & Tobago.

Keegan Pereira converted a penalty corner in the tenth minute, followed by a cheeky scoop over USA goalkeeper Brandon Karess by Gabriel Ho-Garcia nine minutes later for Canada to take a comfortable 2-0 lead at half time.

Early into the third quarter Canada went three up when skipper Scott Tupper gave Karess little chance from the penalty spot in the 44th minute.

The Americans pulled one back two minutes later when William Holt converted from another penalty corner.

In the 55th minute Canada went 4-1 up when Gordon Johnson scored from yet another penalty corner before USA’s Rueben van Dam scored almost immediately after the restart for a 4-2 final score.

Also in Pool A, Chile (WR: 26) overcame a strong display from Barbados (WR: 49) before emerging as 2-1 winners in the second match of the day.

Khodi Akeem Rudder levelled the score for Barbados swinging a penalty corner high into the net in the 42nd minute.

However, Chile grabbed the winner four minutes later after a blunder by Boyce, who miskicked a through ball, only to see Ricardo Achondo crash his shot onto the backboard in the 46th.

In Pool B, Japan (WR: 16) made a superb start with a 3-0 win over Switzerland (WR: 30) thanks to a hat-trick from prolific striker Kenta Tanaka.

Tanaka needed just three minutes to open his account, sprinting down the right flank and, before Swiss goalkeeper Jonas Verest could compose himself, Tanaka had slammed the ball against the far sideboard.

The first minute of the second period saw Tanaka doing it again with a similar run, giving Verest just as little chance as the first item.

In the 34th minute the speedy Tanaka was at it again, outpacing a hapless Switzerland defence to beat Verest for his hat-trick.

The final match of the day saw hosts Trinidad & Tobago (WR: 33) in action but they failed to start the competition with a victory, going down 3-1 to Russia (WR: 22).

Striker Marcus James opened the scoring for T&T in the third minute to the delight of their supporters, a lead the local team held for 25 minutes.

However, the 500-strong crowd was quieted when Anton Kornilov got the equalizer, beating goalkeeper Andre Rocke with a deft flick.

Denis Shchipachev converted a penalty corner in the 37th minute before Marat Matkovskiy sealed the issue two minutes before the end.

After the match T&T captain Darren Cowie said: “The guys played according to plan but a few mistakes, one by me, cost us the match. Russia punished us for those errors.”

Like all the Round 2 events, the competition in Tacarigua – which is located around 20 kilometers inland from capital city Port of Spain – consists of teams that came through the first phase of the competition and nations that were automatically given a bye through to Round 2 due to their higher placement in the FIH Hero World Rankings. The highest ranked teams will enter the World League at the Semi-Final stage of the Hockey World League which will take place in this summer.

The top two finishers from the men’s Round 2 events in Dhaka (4-12 Mar 2017), Belfast (11-19 Mar 2017) and Tacarigua, (25 Mar-2 Apr 2017) are certain to qualify for the Hockey World League Semi-Finals, being joined in the World Cup qualifier phase by the two highest ranked of the third placed finishers from those three events.  Malaysia and China took the top two places at the event in Dhaka, with Egypt (FIH Hero World Ranking: 20) finishing in third place. In Belfast, Ireland claimed a first place finish ahead of France, with Scotland (WR: 27) taking third position.