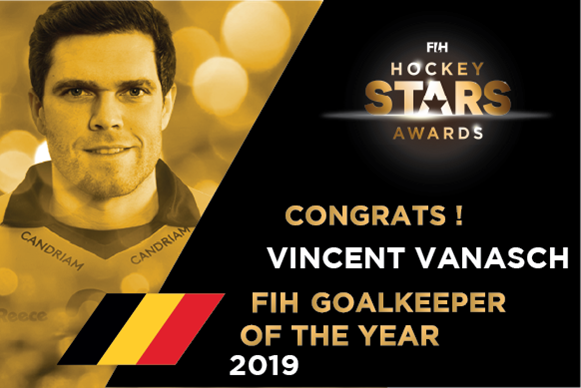 Belgium’s Vincent Vanasch has been named as the 2019 FIH Men's Goalkeeper of the Year, the International Hockey Federation (FIH) can reveal. The Red Lions shot-stopper took the prize ahead of Australia’s Tyler Lovell and Victor Aly of Germany, who finished second and third respectively.

Vincent Vanasch has made history as the first goalkeeper to win three consecutive FIH Goalkeeper of the Year awards. In winning the title for the third time, the Belgium goalkeeper has cemented his reputation as the best ‘keeper in the world at the moment. At 33-years of age, Vanasch remains at the top of his game and, if selected, will be looking to compete in his third Olympic Games later this year.

With more than 230 international caps to his name, Vanasch has been with the Belgium squad throughout their exciting journey over the past eight years. From a fifth-place finish at the London 2012 Olympics to silver at Rio 2016. The Red Lions were crowned World Cup winners in 2018 and took over top spot in the FIH World Rankings in December 2018. The success continued throughout 2019 for both Belgium and Vanasch.

The team finished in second place in the FIH Pro League, behind Australia, before they stormed to victory in front of an exuberant home crowd at the Belfius EuroHockey Championships. Vanasch was voted Goalkeeper of the Tournament at the end of that triumphant event. The first-place finish – which came courtesy of a dominant 5-0 win over Spain in the final - sealed Belgium’s spot at the Olympic Games Tokyo 2020.

In a move that underlines Vanasch’s determination to keep setting himself new targets, Vanasch has recently moved clubs from Waterloo Ducks to Rott-Weiss Cologne. Praise for the Belgium ‘keeper’s approach to his craft comes from his club coach André Henning: “Vincent’s achievements and success speak for themselves. His sober nature, his hard work, his extremely high will to win and his enthusiasm for work make us all enthusiastic.”

How did Vincent Vanasch learn that he had won the award? Watch it here.

And here's a video interview with Vincent Vanasch after receiving the award.