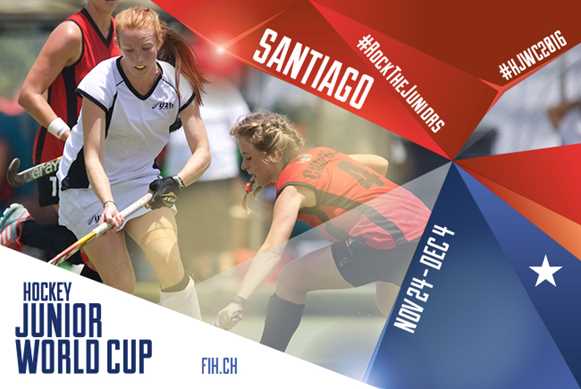 The teams were playing for 9-16th places and today's results will determine which positions they will be competing for in their final matches of the competition.

Today's competitors will enjoy a rest day tomorrow, while the teams who played in the Quarter-Finals will contest the Semi-Finals and 5-8th place play-offs tomorrow (Friday 2 December) as follows (all times local - CLST):

Here is a round-up of the action from day seven:

Zimbabwe 0, New Zealand 16
New Zealand hit the highest score by a team at the women's Hockey Junior World Cup 2016 so far as they put 16 goals past Zimbabwe. This was a fine display of attacking play and clinical finishing in the first of the classification matches. They were aided in building a mammoth score by some sloppy defending by Zimbabwe, but this should not detract from a professional New Zealand performance. The first 10 minutes were goalless, despite New Zealand spending most of the time camped in the Zimbabwe half. Zimbabwe’s goalkeeper, Jordyn Clipstone, was kept busy and pulled off some good saves but from early dominance by the team in white it was clear the end result – although not perhaps the number of goals – was always going New Zealand’s way. The first goal came from Kayla Reed, followed swiftly by goals from Deanna Ritchie and Alia Jaques and that signalled the opening of the flood gates. The first half saw seven goals – captain Phoebe Steele, Megan Hull, Stephanie Dickins and Tarry Davey all found the back of the net. Coach Patricia Davies would have hoped to stem the flood of goals in the second half but New Zealand didn’t let their feet off the pedal and nine more goals rattled in. Dickens, Hull, Jaques with two more, Steele with four, Ritchie and Reed all found the goal and earned New Zealand a crack at achieving a 13th place finish in Saturday’s match where they will face South Africa. Zimbabwe will play France in the 15-16th play-off match that same day. Speaking afterwards, New Zealand’s captain Phoebe Steele said: “We were disappointed not to make the Quarter-Finals so we wanted to go out and play our game. The girls certainly enjoyed this one.”


France 0, South Africa 0 (South Africa win penalty shootout 3-1)
France lost their 13-16th place play-off match in the most heart-breaking way after they were beaten on shoot-out after an intriguing 70 minutes of play. Two different styles of play made this a compelling match between Africa’s finest and the progressive French team. Where France played a cagey defensive and structured game, so South Africa were all-out attack the minute they turned over possession. Both teams had chances but found the respective goalkeepers and defence playing tight, almost impenetrable games. French defender Yohanna Lhopital was particularly impressive as she played a steady game for the French team, commanding her area of the pitch, while Marlise van Tonder kept a cool head in the South African goal. In the shoot-out, South Africa went first and Natalie Esteves was clinical as she gave her team the lead. Emma Ponthieu responded for France but none of her team mates were able to follow her example. For South Africa, Danielle Cairns and Tegan Fourie both scored to send South Africa into a battle for 13th place against the New Zealand on Saturday. Hero of the shoot-out, South Africa’s goalkeeper Marlise van Tonder said: “We made life difficult for ourselves out there but at least we kept a clean sheet. In the shoot-out, I just told myself to stay up, stay calm and don’t dive unnecessarily.”


Korea 0, China 1
Two Asian giants, China and Korea, were separated by a single goal scored by Tang Wanli in the 44th minute. China had a chance to double the score, eight minutes from time when Zhou Yu and Li Hong combined well to force a foot foul on the line. Li Hong stepped up to take the ensuing penalty stroke but her shot flew wide of Lim Eunhee’s goal. Korea had their own chances,, missing a penalty stroke in the first half and a number of penalty corners. The Chinese defence held firm and Korea's shots were either cleared or were struck wide. While both teams were hard working across the pitch and fast on the break, China were worthy winners because of the speed and accuracy of their passing game, their use of channels to build up attacks and the willingness of the midfield and forwards to run at goal. Ou Zixia played a captain’s game, leading her team calmly out of tricky moments in defence, while Zhang Jinrong in midfield was a fizzing ball of energy as she ran at the Korean defence. The result means China will face Japan for ninth place on Saturday 3 December while Korea will battle it out with host nation Chile for 11-12th spot later that day.

Japan 6, Chile 1
The host nation were given a lesson in patient build up as they were comprehensively beaten by a well-organised and hard-working Japanese team. Where Japan made the ball work hard, Chile were made to work for every ball. By the closing stages of the match, Japan’s players looked to be coolly in control, while Chile’s players looked exhausted. That said, Chile’s coach, Alejandro Gomez, must have been pleased with both the work rate displayed in this game and the improvement his team has shown over the course of the competition. The skills are in evidence, quite often the difference between the teams was a lack of clinical finishing. This was highlighted when a brilliant piece of build-up play from Agustina Solano passed unchallenged across the face of Japan’s goal. Japan opened their account in the 10th minute with a goal from Ayaka Nishimura. This was the first of five goals scored by Japan from open play as their slick passing tore the Chile defence apart. Mai Toriyama was next onto the score sheet, followed by two goals from Motomi Kawamura. Maho Segawa scored the fifth, and Airi Nakahana made it six, from a penalty corner, before Chile got onto the scoresheet through Fernanda Villagran. Chile battled to the final whistle, with Kim Jacob unlucky not to get on the score-sheet, but this was to be Japan’s day.