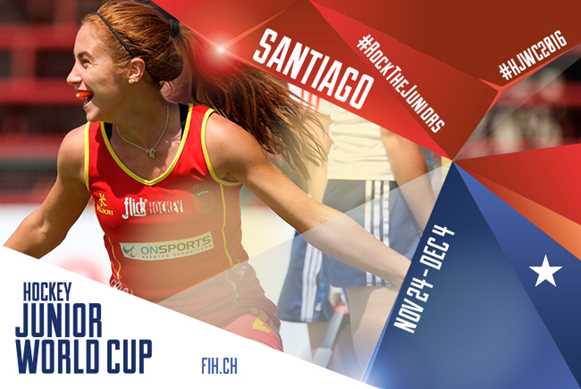 Netherlands, Spain, Argentina and Australia qualified for the Semi-Finals of the women’s Hockey Junior World Cup 2016 after winning their Quarter-Finals matches in Santiago, Chile today.

Those results now mean that Netherlands will play Spain and Argentina come up against Australia in the Semi-Finals, whilst the losers of today’s Quarter-Finals will play in classification matches, all on Friday 2 December (schedule to be confirmed shortly).

With all of these teams enjoying a rest day tomorrow, the bottom two teams from each pool will be competing in the first of the classification matches which take place as follows (all times local - CLST):

Netherlands 5, Germany 0
Netherlands made light work of their Quarter-Final against Germany as they won 5-0 in the first match of the day. The European champions opened the scoring in 11 minutes through Marie Burg before the event’s leading goal-scorer, Frederique Matla, added to her tally in the 23rd minute. Following the half-time break, Netherlands piled on the pressure. Goals from Pleun van der Plas in the 37th and Yentl Leemans in the 56th minute edged the Dutch further ahead before Matla scored her second of the game with a penalty stroke. Speaking afterwards, Charlotte Adegeest said: “We expected a tough game – Germany is always a really tough game for us, it’s a classic game. We were really excited to play today as we have just had two rest days. We had so much energy, we were so excited, that’s why we won.”


Spain 5, England 3
Despite the scoreline, Spain largely dominated this eight goal thriller against European rivals England. After some early exchanges, Spain took advantage in the 15th minute through captain Begoña Garcia. England then drew level nine minutes later through a penalty corner converted by Erica Sanders. Seconds before half-time, Spain’s Belen Ingelsias knocked in a well-executed penalty corner to lead 2-1 by the half-time break. Whilst in front, an inspiring team talk by their English coach, Adrian Lock, saw the Spanish coming out fighting in the second half, going 5-1 ahead after 53 minutes. England then got back into the game, with Megan Crowson providing the goals through a penalty stroke then a penalty corner. It was too little too late for England though as Spain held on to progress to the Semi-Finals. Afterwards, Spain captain Begoña Garcia said: “We are very happy. We knew that it would be a very hard match, but I think we played very well and scored many goals.” Looking ahead she added: “We know Netherlands are a very tough team but we have nothing to lose. We are ready for that game!”

Argentina 2, USA 0
This match proved to be one of the closest of the day. Whilst Argentina were creative in their attacks, USA’s hard-work and solid structure stemmed the threat of their Pan American rivals for most of the game. Argentina did manage to get ahead at a crucial time though when Bianca Donati scored from a penalty corner just before half-time. Captain Lucina von der Heyde then doubled their lead on 49 minutes from open play. Argentina managed to hold on to their lead despite USA’s perseverance, taking the win that sees the Pan American champions progress into Friday’s Semi-Finals where they will face Australia.

Australia 7, Belgium 2
The last match of the day saw Oceania champions take on Pool D runners up Belgium. The game got off to a flier as Belgium took the lead after only three minutes through Lien Hillewaert. Australia immediately replied as Rio 2016 star Grace Stewart equalised in the fifth minute. Madison Fitzpatrick restored Australia’s lead again in the 29th minute but Belgium hit back once again, this time through Joanne Peeters only seconds later. Australia took the lead again in the 48th minute through Ambrosia Malone before Grace Stewart grabbed her second of the night after 51 minutes. Australia went on to score three more goals in the match thanks to Savannah Fitzpatrick, Michaela Spano and Ambrosia Malone as they progressed to Friday’s Semi-Finals.