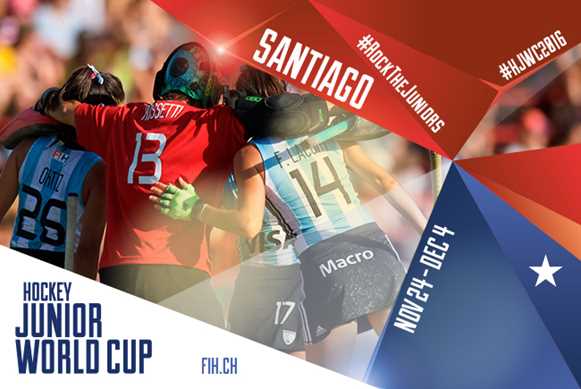 It will be a Netherlands versus Argentina final for the second successive women’s Hockey Junior World Cup after both teams won their Semi-Finals of the 2016 edition in Santiago, Chile earlier today.

Argentina defeated Australia in the first Semi-Final before Netherlands went on to win against Spain as they continue their title defence.

Earlier in the day Belgium beat USA whilst Germany won their encounter with England in the 5-8th place classification matches.

All of these teams will now enjoy a rest day tomorrow before returning to the field on Sunday 4 December. Then, the final classification matches will take place at 11:45 and 14:00 before Australia play Spain for the bronze medals at 16:15 then Netherlands take on Argentina in the final at 18:30 (all times local CLST).

Argentina 4, Australia 2
A large crowd turned up to cheer on Argentina in their showdown with Australia’s Jillaroos. Their backing inspired the Pan American champions to a 4-2 victory in a game which was action packed at both ends. Argentina were perhaps the better team for many parts of the match as their skill and flair overpowered Australia. But the Oceania champions did not shy away from the challenge as they fought hard throughout. Bianca Donati gave Argentina fans reason to cheer louder when she scored after four minutes from a penalty corner. That did however prove to be the only goal of the first half, despite numerous attempts on target for both teams. Argentina doubled their lead in the 44th minute through Lucia Sanguinetti before Milagros Fernandez scored from open play in the 57th minute to go 3-0 ahead. Then the comeback was on. Australia’s Greta Hayes pulled one back in the 66th minute before captain Mariah Williams made the score 3-2 with only a minute to go. However, as Australia threw bodies forward in an attempt to find an equaliser Argentina took advantage as they went on to score one final goal in the dying seconds through Julieta Jankunas. Speaking afterwards, Argentina goal-scorer Lucia Sanguinetti said: “We are so happy because we did everything that we planned. We worked so hard today and had a great performance. We knew the game today was going to be hard because Australia is a great team, so we’re really happy to be in the final again.”


Netherlands 4, Spain 0
Netherland will defend their title in the final against Argentina thanks to their impressive 4-0 victory against Spain. Pleun van der Plas scored her fifth goal of the event after only 11 minutes whilst the event’s top goal-scorer, Frederique Matla, extended her lead at the top of the charts after scoring two penalty strokes in this game, the first in the 22nd minute and the second only two minutes from time. That followed Maxime Kerstholt’s goal in the 58th minute. The Dutch performance was further evidence of their dominance at this event, where they have scored 37 goals so far, nearly double that of their next opponents Argentina (21). Sunday’s final should not be missed – with the two in-form teams at this event meeting in the final for the second successive women’s Hockey Junior World Cup. Speaking afterwards, Netherlands captain Maartje Krekelaar said: “I think we did great tonight. We had a lot of beautiful combinations, beautiful goals so it was a great day.” Speaking about their final opponents, Fabienne Roosen said: “Argentina are very good, they are very skilful, have good offence, so it will be a tough game.”


USA 1, Belgium 2
Belgium opened the scoring against USA in fine fashion as Daphne Gose finished off a clever exchange of passing in the seventh minute. Whilst they continued to attack the USA goal they could not find a way through until seconds before half-time when Lien Hillewaert doubled their lead through open play. USA tried their best to get back into the match but struggled with the pace and skill of the Belgian team. However, the Americans did get some reward as Erin Matson scored from a penalty corner with only two minutes left on the clock. But it was too little too late for USA who were unable to draw level as Belgium took the win and progressed to the 5 v 6 classification match against Germany.

Germany 1, England 0
Teresa Martin Pelegrina’s flick over England goalkeeper Miriam Pritchard in the 33rd minute was enough to give Germany the win in what was an evenly matched battle throughout. Both teams had several chances, with Germany perhaps creating the better in both halves. It could have gone either way but for strong defensive performances combined with a lack of finishing from the European rivals. The win put Germany into the 5 v 6 match whilst England will play USA to find out who finishes seventh or eighth.