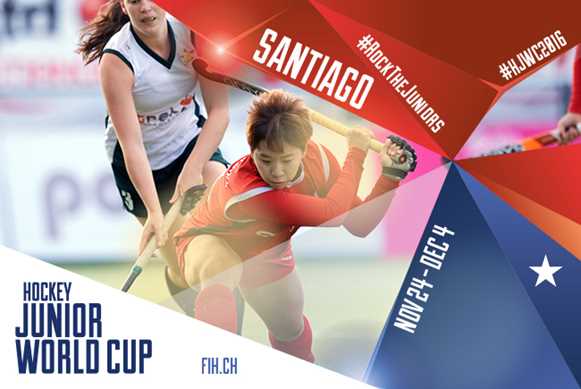 Goals continued to rain in on day two of the women’s Hockey Junior World Cup 2016 in Chile as Friday’s play provided fast-paced, action packed hockey at the Estadio Manaquehue in Santiago, Chile.

Germany, Argentina, Spain, Korea and Netherlands all picked up important wins whilst China drew once again, this time with New Zealand.

Pool B got the day off to an exciting start before teams from Pools A and D returned to the field for their second games in two days as Pool C teams enjoyed their rest day.

Pool A:
Korea bounced back from a heavy opening day defeat against Netherlands to defeat Zimbabwe 6-0. The team from Africa were much improved after their opening day loss to USA but struggled with Korea’s pace and endurance during this match. Minji Kim and Soyun Moon grabbed two goals each as Seoyeong Kim and captain Hyejin Cho also got on the scoresheet.

USA and Netherlands played out an exciting end to the day. The Americans took an early lead through a clever penalty corner combination, slotted home by Catherine Caro after only three minutes. It took a while for Netherlands to get into their stride but when they did three goals arrived as they went into the half-time break with a comfortable lead. A further two goals from penalty corners in the second half earned Netherlands a 5-1 victory as they finish day two at the top of Pool A.

Pool B:
Germany and France were the first teams to grace the field this morning and it was the travelling German support who left happier of the two. A clinical performance saw Germany score 10 goals against their European neighbours who replied with a single consolation goal. Speaking after the game, Germany captain Elisa Gräve said: “We were very nervous, but we became better and better as the game went on. We had an aim of scoring many goals, we achieved that so that’s great. It’s very important to win your opening game, but we take each game step by step. When you have a win in your bag it’s pretty good for your confidence which will be crucial for our next game against Argentina.”

Pan American junior champions Argentina, runners up at this event in 2013, got their campaign off to a positive start with a 3-1 win. It wasn’t easy however against a well-disciplined Japanese team who were making their debut at this level. A penalty corner from captain Agustina Gorzelany and two field goals, one from Lucina von der Heyde and one from Maria Ortiz, were enough to better one goal scored by Japan’s Motomi Kawamura from a penalty corner. After their win, Argentinian Olympian Maria Granatto said: “This was a really tough game to play – Japan are a very good team. Of course the first matches are always difficult but the most important thing was to win today.”


Pool D:
Spain took a lot of positives from their opening day last minute draw against China and went one better against European rivals Belgium. Mariona Serrahima had a stand-out game for the Spanish, opening the scoring from a penalty corner in the 23rd minute before grabbing her second from open play after 61 minutes as her team went on to win 4-0.

A late double from Megan Hull earned New Zealand a 2-2 draw with China. The Asian junior champions raced to a 2-0 lead before half-time with Jinrong Zhang netting in the 25th minute before Mengling Zhong doubled their lead 11 minutes later. New Zealand fought hard in the second half and stayed in the game when Hull smashed home from a penalty corner variation in the 58th minute. Four minutes later New Zealand earned another penalty corner and it was Hull again who delivered the equaliser in similar fashion to her first goal.

Play continues tomorrow at 12:00 (local) with Pool B and C teams back on the field as Pool A and D teams enjoy a rest day.