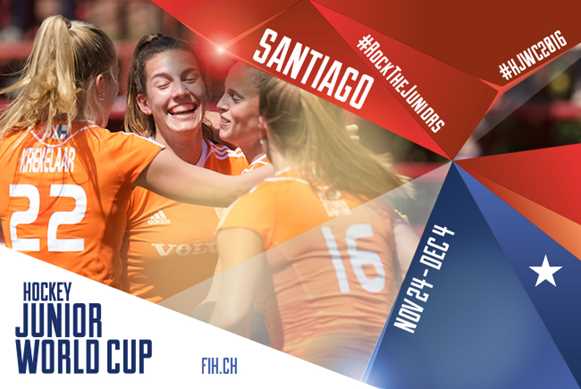 Netherlands got their title defence off to a winning start in Santiago Photo: FIH/World Sports Pics

24 November 2016: The planet’s best junior women’s athletes rocked Santiago on the first day of competition at the Hockey Junior World Cup 2016, with 41 goals scored during six action-packed matches at the Estadio Manaquehue.

A large opening day crowd came out in force to cheer on the world’s top junior women’s teams beneath the Chilean sun and were not disappointed. During 420 minutes of hockey, Belgium, USA, Netherlands, Australia and England picked up wins.

Whilst Pool B begin their matches tomorrow, here’s a summary of the day’s action:

Pool A:
Netherlands began their title defence with a comfortable 10-2 win against Korea. Two goals for Frederique Matla and Pleun van der Plas helped their team on their way, with Soyun Moon and Seoyeong Kim scoring two consolation goals for Korea. Speaking afterwards, Netherlands captain Maartje Krekelaar said: “We played very well today. We passed a lot and produced a lot of beautiful combinations so it was a great game for us. We pressed very well, gained a lot of possession and were always attacking. That is the power within our team.”

Zimbabwe’s first appearance in a Hockey Junior World Cup since 2005 ended in a heavy defeat at the hands of an energetic and efficient USA team. Seven different scorers helped USA to their 10-0 win, including doubles for Erin Matson and Ashley Hoffman. Speaking after their victory, USA captain Julia Young reflected on the benefits that events like this give young athletes. She said: “We all come from different areas within the United States so being able to come together and play against competition like this – you have to be so much faster, more aware, it makes you an all-round better player.”

Pool C:
This Pool saw the champions of Oceania and Africa go head to head as Australia took on South Africa. It was however Australia’s ‘Jillaroos’ who took this encounter with a 7-0 win. Two from Sophie Taylor in addition to goals from Greta Hayes, Michaela Spano, Savannah Fitzpatrick, Kate Hanna and Grace Stewart contributed to a flawless opening game for Australia.

Later in the evening an almost capacity crowd enjoyed a Chilean band, traditional dancing and a helicopter fly past. That inspired the home team as they put up a strong fight against a determined England team. Esme Burge scored from a penalty corner after eighteen minutes to give England a 1-0 lead which they defiantly held for the remainder of the game to take the win.

Pool D:
The opening matches of Pool D provided some closely fought games suggesting this could be one of the toughest Pools to qualify from.

In the first match of the day China and Spain played out a hugely entertaining eight goal thriller which saw the match end in a 4-4 draw. China’s Zixia Ou and Spain’s Anna Gil both grabbed two goals each in what was arguably the most exciting match of the day, with Spain’s Belen Iglesias scoring a crucial stoppage time equaliser.

New Zealand however were edged 2-1 by Belgium. The Kiwis started well and found themselves leading 1-0 after a seventh minute penalty corner was slotted home by Stephanie Dickins. But two quick fire field goals from Lien Hillewaert in the 26th and 29th minutes snatched the advantage for Belgium which they held on to for the remainder of the match. Speaking afterwards, New Zealand Head coach Sean Dancer said: “I am pleased with our girls’ effort today, we showed real spirit to keep fighting in tough conditions but unfortunately we were unable to make more of some of our opportunities.”