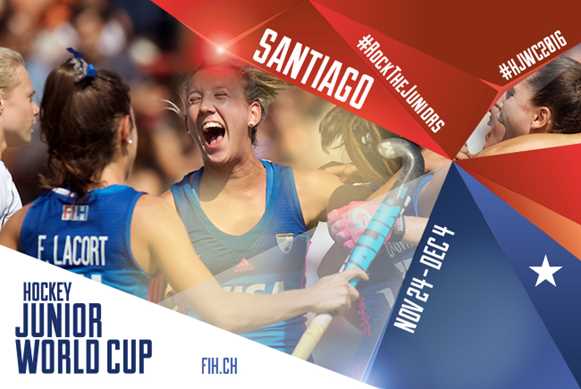 Argentina were the first team to qualify from Pool B for the Quarter-Finals of the women’s Hockey Junior World Cup 2016 as they defeated Germany 4-1 to guarantee one of the top two spots in the Pool.

They join Netherlands and Spain who qualified for the Quarter-Finals of the event, being held in Santiago, Chile, yesterday.

That match proved to be to most decisive of the day although the other three matches in Pools B and C provided plenty of excitement as all teams strive to quality for the Quarter-Finals.

With Pool A and D teams enjoying a rest day today, they will be looking forward to returning to the field tomorrow as competition gets underway at 12:00 (local).

Pool B:
Argentina guaranteed qualification for the Quarter-Finals with an efficient display against Pool B rivals Germany. Julieta Jankunas got the scoring underway for Argentina in the 17th minute before Rio 2016 star Maria Granatto doubled their lead seven minutes later. She scored again through a penalty corner seconds before the half-time break to make the score 3-0. Captain Lucina von der Heyde completed the scoring for Argentina in the second half, with Germany’s sole reply in the 59th minute from a penalty corner converted by captain Viktoria Huse.

Japan and France shared the spoils in the first game earlier in the day. Japan were once again well disciplined in their play and whilst they had several opportunities to take the lead, an outstanding display by France goalkeeper Mathilde Petriaux kept the scores level as the match finished 0-0, which keeps both teams in with a chance of qualifying for the Quarter-Finals. Speaking after the game, France’s Victorine Vankemmel said: “We knew it was going to be a tough game but we gave it our all. We had to be very defensive, very condensed in our D. We had to face a lot of short corners but we had a very good goalkeeper out there today.”


Pool C:
The ‘winner takes all’ game between England and Australia ended as a draw in what proved to be an extremely tight but highly entertaining game. England were fast out the traps and went 1-0 ahead from a penalty corner after only four minutes through Erica Sanders. England battled hard to hold on to that lead but Australia’s perseverance paid off when Renee Taylor equalised through a penalty corner in the 43rd minute. With the game ending 1-1 this result means that both teams finished the day topping the Pool with four points with only one more game to play. Speaking afterwards, Australian goalscorer Renee Taylor said: “It is always a hard slog-out with England. We let them get on top of us early on which was a bit annoying, so we had to fight our way back into it, but that happens in tournaments.” She continued: “With a draw, we’re happy with that – it’s not a loss, obviously we want the win, but going forward it’s a steep learning curve for us.”


Chile meanwhile remain in the hunt for Quarter-Final qualification as they secured their first win of the event in front of a passionate home crowd. Their opponents, African champions South Africa, tried their best to quieten the home fans but Chile broke the deadlock after only five minutes when Fernanda Villagran Verdaguer scored high into the net from a penalty corner in the fifth minute. South Africa hit back however, drawing level through Gretchin Davids after 51 minutes, but their joy was short lived. Sofia Machado Paonessa restored the lead for Chile three minutes later and thanks to the backing of local fans, the Chilean team were inspired to victory as they held on to win 2-1 to keep their Quarter-Final qualification hopes alive.