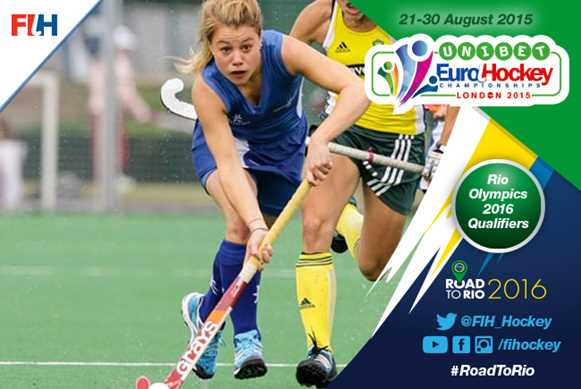 Scotland women are out to impress in London

Scotland women aiming to impress ahead of Rio 2016

Scotland women head into the upcoming Unibet EuroHockey Championships 2015 in London looking to build upon their sixth place finish at the 2014 Commonwealth Games.

Whilst aiming to finish as high as possible at this year's Championship, the Scottish women have an extra incentive.

With the Olympic Games less than a year away, Great Britain coaches will be keeping an eye out over the coming months for any talent that they can call upon from the British nations for Rio 2016. A strong performance at the EuroHockey Championships will certainly give those coaches something to think about as they look to finalise their team selection for the Olympics.

Ranked 17 in the world, Scotland’s team for this year’s Championships will blend a mix of experience with up and coming stars, with Senior Women’s Head Coach Gordon Shepherd already seeing many positives following a number of good results in recent test matches.

On his team selection for the EuroHockey Championships 2015, he said: “As a group of coaches, we’ve been really happy with the players and how they have trained recently. We have three players who will be playing their first international tournament but equally we have a number of players with a lot of experience at this level.”

His selection includes the experienced Emily Maguire who won a bronze medal with Great Britain at the 2012 Olympic Games, while Sarah Robertson and Amy Gibson have also recently been involved in the Great Britain squads.

In preparation for the EuroHockey Championships, Scotland have played a number of test matches over the past couple of months. A 4-3 win against reigning European Champions Germany was one of their highlights in a three nation event in Hamburg, Germany in July.

After losing to Spain in their final game in Hamburg, Scotland then flew on to Madrid, Spain, for a warm weather training camp and three further international matches against their hosts. In their first game the two teams drew 1-1 before Scotland emerged 3-1 winners with one more game still to play.

Earlier in June they won a test series against Wales, before scoring 18 goals in three games against the Czech Republic, with Nikki Lloyd, Vikki Bunce and Kareena Marshall scoring the majority of their goals.

Scotland coach Shepherd explained that all of these games were ideal preparation for the players to get right up to speed ahead of the Europeans with an expectation that his team will be competing and performing at the same level as those nations.

Scotland have been drawn against world number five ranked Germany, seventh ranked England, and 16th ranked Italy. In London they hope to retain their place in the tournament by equalling or improving on their sixth place finish at the last edition of this Championship.