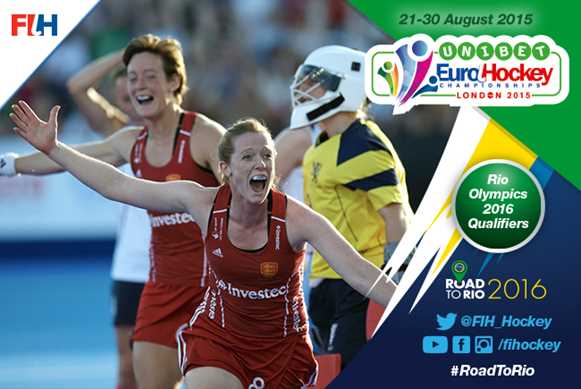 Netherlands score 9 as Germany and England also pick up wins

The opening game of the women's Unibet EuroHockey Championship 2015, being held at Lee Valley hockey and Tennis Centre in Queen Elizabeth Olympic Park in London, saw Belgium and Spain end 0-0.

Two ranking points separate the two teams with Belgium sitting 12th in the FIH world rankings and Spain two places lower on 14. The similarity in playing style meant both teams really contained each other and stifled any creativity.

For Belgium defender Anouk Raes, it was a particularly disappointing start to the competition as she picked up two yellow cards during the match meaning she will miss their next pool game against Poland.

Following the game, Spanish captain Rocio Ybarra said: “I am so disappointed that we didn’t bring our best game today. We found that tough, Belgium play a very similar game to us so we tended to balance each other out. For example, when we were attacking, they pressed high; when they attacked we pressed well. We just couldn’t find a way in.”

Belgium’s Lieselotte van Lindt agreed with her Spanish opponent. She said: “That was really tough. We knew that they have improved a lot since the last European Cup and it was really a must win game for us, but it was so close and at the end we were with 10 so it was too difficult to win the game.”

Kelly Jonker opened the scoring for Netherlands with a simple tap-in after after 13 minutes. Seconds later, Eva de Goede's shot left ‘keeper Marta Kucharska without a hope of making a save to make it 2-0.

The third goal was scored by Carlien Dirkse van den Heuvel after 20 minutes as the energetic midfielder picked up a pass from Naomi van As, before slotting the ball home.

A steal by Valerie Magis just in front of the Polish circle released the ball to Ellen Hoog who made the most of the opportunity as she scored the first of her hat-trick after 25 minutes of play.

Seconds before half time, Ginelle Zerbo found Hoog in space at the top of the circle and the striker had no hesitation in shooting the ball in the top of the net.

The second half continued much the same as Margot van Geffen fed the ball into Jonker: the striker scored her second, this time a beautifully taken deflection.

Captain Maartje Paumen scored a trade-mark penalty corner after 40 minutes to make it 7-0, but even then the Netherlands were not finished. Hoog scored again after 53 minutes, then Marloes Keetels a minute later.

After the game, Netherlands Eva de Goede said: “That was the way we wanted to play. Sometimes we pass, pass, pass; we over think it, this was just good, attacking hockey.

Following their loss, Poland's Natalia Wisniewska said: "We knew they were going to be tough, but we have learnt some valuable lessons.”

The game between England and Scotland went the way of the host nation in the opening game of women's Pool B.

In the match between world number seven ranked England and 17th ranked Scotland, it was the team from north of the border who took the first advantage.

The Scottish team’s efforts in the early minutes were repaid when they won the first penalty corner of the game within two minutes of the game starting. Kareena Marshall made the most of the opportunity when she deflected Sarah Robertson’s shot into the goal past Maddie Hinch.

England’s first penalty corner came when Aileen Davis was judged to have fouled Alex Danson. The subsequent penalty corner was saved, but the host nation were quickly back on the attack. Kate Richardson-Walsh made no mistake as she fired home from their second penalty corner after 10 minutes of play.

The second quarter saw England move into the ascendency before they took the lead when Lily Owsley drove through the Scotland defence and found Helen Richardson-Walsh with her pass. The midfielder found the goal with a precise shot that left Amy Gibson stranded with 20 minutes on the clock.

Following their win, England coach Danny Kerry said: “The challenge is for the players to expect and cope with expectation. If we want to be up there with the best, we have to learn to cope with pressure. We looked really sluggish, although there were brief periods of sparkle. I think the players were tense, largely because of the scoreline and we were way off our best.”

Germany 4, Italy 0
Reigning European champions Germany began their title defence with a 4-0 win against Italy in the final game of Saturday's play at the EuroHockey Championships 2015.

Germany's Lisa Altenburg got the first goal with a well-taken strike just two minutes into the game. The lead was doubled after 22 minutes when Hannah Kruger fired a penalty stroke past the Italian goalkeeper Martina Chirico.

The final quarter saw Germany extend their lead in the 46th minute through Lydia Haase; the forward was able to pounce on a loose ball after the initial save by Chirico was not cleared. The final goal was scored by Marie Mavers who connected with a cross to make it 4-0.