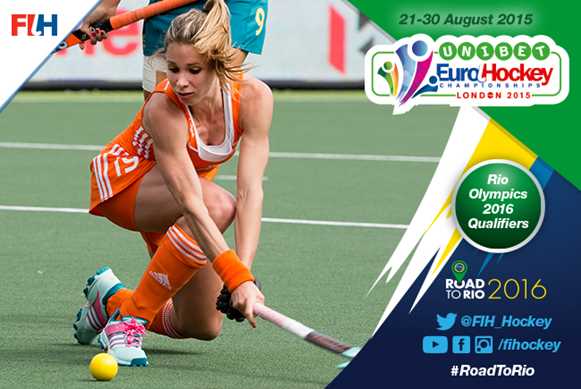 Europe’s women ready to make their mark on EuroHockey Championships

The women’s competition will run from Saturday 22 August until Sunday 30 August and will feature teams from Belgium, England, Spain, Germany, Italy, Netherlands, Poland and Scotland.

This year the women will be have an extra incentive for claiming the championship title - the winners will also guarantee qualification for the Rio 2016 Olympic Games as Continental Champions.

In the women’s competition, world champions and world number one ranked Netherlands will arrive on the back of a dominant display at the Hockey World League (HWL) Semi-Final in Antwerp.

Having scored 25 goals in four games in the pool stage they moved on to the final stages of that competition where they defeated India 7-0, world number two ranked Australia 5-1, before beating Korea 2-1 in the final.

Germany, ranked fifth in the world, secured Olympic Qualification with a third place in the HWL Semi-Final in Valencia. The reigning European Champions needed two shoot-outs to take third spot, the second of these seeing off world number three ranked Argentina.

Great Britain revert back to their individual nations for the Unibet EuroHockey Championships. The majority of Danny Kerry’s side who won seven games from seven in Valencia are likely to represent England, ranked seventh in the world, at this event.

Playing in their homeland at the HWL Semi-Finals in Valencia, world number 14 ranked Spain produced some outstanding performances, gaining a draw against Argentina and a win over China before a shoot-out loss to Germany ended their medal hopes. They ended up sixth after a 3-1 defeat to the USA.

Another team who drew confidence playing in front of a home crowd at the HWL Semi-Final, world number 12 ranked Belgium suffered consecutive shoot-out defeats to Korea and Japan to finish in seventh place with a 4-2 win over Italy in Antwerp.

That 4-2 loss to Belgium condemned world number 16 ranked Italy to an eighth place finish in the HWL Semi-Final. The Azzurri will have taken confidence by a 4-0 win over France in the pool stages. In Valentina Braconi, who scored twice in the tournament, they have an exciting up and coming talent.

Poland, ranked 24 in the world, took ninth place at the same tournament after enduring some heavy losses to the likes of New Zealand and Australia. The performances of captain Marlena Rybacha, the goals of Amelia Katerla and Natalia Wisniewska as well as a 5-1 win against the French will give them something to build on as they too look to avoid relegation.

Scotland, who are now ranked 17 in the world, were not involved in the HWL Semi-Finals. They have however been in plenty of action over the last couple of months. In June they had the better of a test series against Wales, before scoring 18 goals in three games against the Czech Republic, with Nikki Lloyd, Vikki Bunce and Kareena Marshall scoring the majority of their goals.