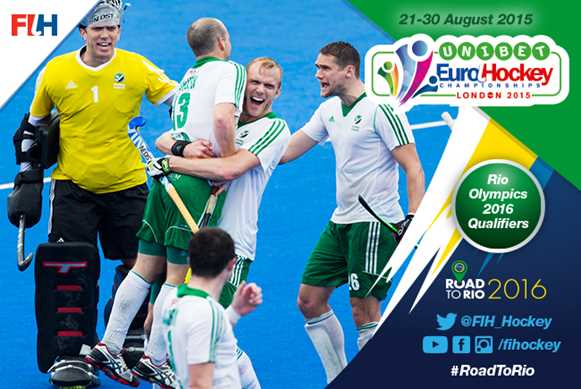 Ireland produced a dazzling display to secure a stunning draw against Belgium’s Red Lions on Tuesday (25 August), a result that not only upset the FIH World Rankings but also saw the Green Machine reach the men's semi-finals of the Unibet EuroHockey Championships ahead of their illustrious opponents.

The world number 14, coached by former South Africa international Craig Fulton, fully deserved their point against the fourth best team on the planet, ensuring that they finished second in Pool B behind Olympic champions Germany, who cruised to victory against France earlier in the day. The Irish will now focus their minds on the possibility of another giant killing when they meet Pool A winners the Netherlands in Thursday’s semi-finals, with Pool B winners Germany going head-to-head against an England team that claimed a crucial victory over Spain to secure their place in the final four.

More details on Tuesday’s matches can be found below.

Germany 7-2 France
Germany displayed confidence and class to ease past France in 7-2 win to top Pool B and progress to the semi-finals. Braces from Moritz Fürste and Florian Fuchs helped Germany on their way to victory and by finishing first in the group ensured a meeting with the team that finishes second in Pool A.

Speaking on his side’s performance and progression to the semi-finals, Fuchs said: “I don’t think we played our best hockey, but in the end we won 7-2. France fought really hard, especially in the first half. In the end we showed our quality and we are now ready for the semi-finals. It’s always important to finish first. To win all the games is important for our confidence.”

Belgium 2-2 Ireland
Ireland’s Green Machine came through a pulsating 2-2 draw with Belgium to make history by reaching the semi-finals of the European Championships for the first time.

Going into the final Pool B game level on points with Belgium but with a better goal difference, Ireland’s qualification fate was very much in the balance. Ireland lead twice in the match thanks to strikes from Peter Caruth and John Jackson, with Sebastien Dockier and Florent van Aubel restoring parity on each occasion. Craig Fulton’s side survived a cagey final quarter to seal their place in the competition semi-finals ahead of a team that sits ten places above them in the FIH World Rankings.

Russia 0-8 Netherlands
The unbeaten Netherlands cruised through to the semi-finals of the Unibet European Championships, after beating event debutants Russia 8-0 in their final group match.

Talking after the game, Hertzberger said: “This sort of game actually makes it harder because a couple of times there was laziness slipping into our game, but we still won 8-0 so that’s fine. Pirmin (Blaak, the goalkeeper) didn’t concede a goal so we don’t have any goals against us in this series so that’s great.”

England 4-0 Spain
Home favourites England were in sparkling form in the final match of the day, cruising to a 4-0 victory over Spain with star midfielder Ashley Jackson scoring twice as the hosts dominated from start to finish.

A ripping penalty corner drag-flick from Jackson in the second quarter gave the home fans plenty to cheer about before the advantage was doubled four minutes later thanks to the lightning fast reactions of team captain Barry Middleton. Chris Griffiths added a third in the third quarter to put the result beyond all doubt, with man-of-the-match Jackson adding a fourth late in the game to set up a semi-final against Pool B winners Germany.

“It was a fantastic team performance”, said two goal hero Ashley Jackson after the match. “We were a little bit frustrated with the performance we put out there against the Dutch and felt that we should have got something out of the game and didn’t play well enough, so to come back against a very very tough team, a team I have not beaten that often in competition hockey, to have a safe scoreline in the end was very relieving.”