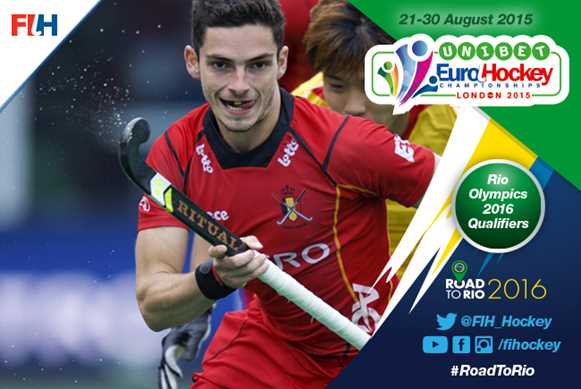 Belgium men and women are aiming for European glory

Both the Belgium men’s and women's teams will be heading to London desperate for a first place finish. For their men, the Red Lions, it is a matter of pride – too many second place finishes. For the women, it is their last chance to qualify for Rio 2016.

The Belgium Red Lions are ready to roar at the Unibet EuroHockey Championships with the team, under head coach Jeroem Delmee, hoping to change a string of second place finishes into a gold medal.

Certainly the team will be determined to go one better than its silver medal finish against Germany in this competition two years ago.

Delmee has made two omissions from his selection – Thomas Briels and Simon Gougnard are not in the 18-man squad.

The Red Lions have made no secret of their determination to win a major trophy and, although the team secured its place at the Rio 2016 Olympics by virtue of their second place finish at the Hockey World League Semi-Final in Antwerp, Delmee, Dohmen and company would like nothing more than to take the European title in London.

The team certainly has the players to do the job. In Tom Boon and Tanguy Cosyns, Belgium have world class strikers and both Sebastien Dockier and John-John Dohmen were in impressive form in Antwerp.

The team has just played in the four-match Ergo Masters tournament in Hamburg, where they faced Germany, England and Spain. The Red Lions finished second behind Germany, with Boon ending the tournament top goal scorer, signalling his readiness for the challenge ahead.

For the women's team, qualification for Rio 2016 is still a goal, although the team will know they will have their work cut out at these championships.

They face Spain and Poland in their group, both matches that head coach Pascal Kina will view as winnable, but they also face the world number one side, the Netherlands, in the final pool match. The team knows that only a first place finish will seal a trip to Rio next year.

However, like their male counterparts, Belgium women - the Red Panthers, are ambitious and will certainly hope to take a podium position at least. They finished fourth in the 2013 European Championships and were unlucky to be beaten by eventual winners Germany in the semi-finals in penalty shoot-out after the match finished 2-2.

Kina has omitted Anne-Sophie Weyns and Caroline Struijk from his 18-player squad and Anne-Sophie De Scheemaekere has also indicated that she is not available for selection.

The engine room of the team will once again be the powerful Stephanie De Groof, while Alix Gerniers and Barbara Nelen can be relied on to lead the attack.

For more information about the event, and to buy tickets, visit:http://eurohockey2015.co.uk