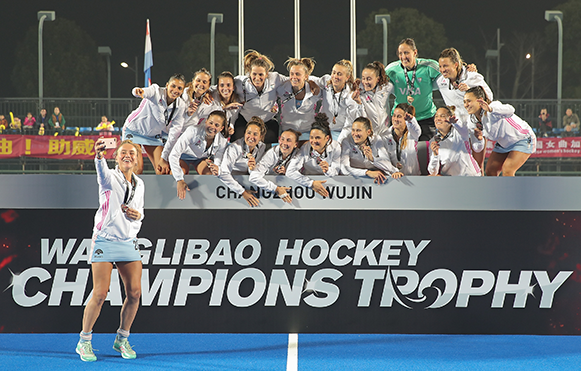 It was super six for Argentina as they hit their stride against host nation China in the bronze medal game.

Quick goals from Delfina Merino and Maria Granatto in the opening five minutes of the bronze medal match were enough to put China on the back foot.

The intensity of Las Leonas' attack saw the host nation unable to replicate the form that initially put them in the bronze medal match.

The second quarter saw Argentina extend their lead as Granatto scored her second goal – a niftily-taken shot that she picked out of the mid-air and batted past Ye Jiao in the China goal.

China came back into the game towards the end of the second quarter with a series of penalty corners. Gu Bingfeng came close to closing the deficit but Belen Succi was alert to the danger and did enough to put the 'keeper off.

The second half followed a similar pattern. Argentina continued to probe the China defence but showed huge discipline to get the entire team behind the ball when play broke down. Lucina von der Heyde and Florencia Habif were both on top form as they broke down the China attack and drove out of defence time and again.

The goal that ended China's dream came from a sweeping movement by Argentina which saw the ball passed quickly up the pitch to the opposition's goal. Ye Jiao saved well but there was nothing the 'keeper could do about the follow-up shot from Julieta Jankunas.

Two more goals followed, as first Sofia Toccalino and then Martina Cavallero found a way through the China defence. "We played well at stages throughout this tournament and never doubted our ability to put in a performance like this but we just couldn't score the goals," said captain Delfina Merino, speaking after the game.

"Today we did and this medal – well today the bronze feels like a gold to us."

Great Britain saved their most convincing performance for their last game of the tournament as they beat Japan 2-1 and ensured that they maintained their mantra of 'always winning their last game'.

The script looked to be going the way of the Cherry Blossoms as they took a lead against Great Britain in the fourth minute of the game. A fast move saw Kanon Mori take the ball around the back of the Great Britain defence and slip to Yuri Nagai, who made no mistake in shooting home.

Great Britain responded immediately and a incisive pass from Susannah Townsend found Anna Toman. The midfielder has really grown into the tournament and her run and pass found Hannah Martin, who needed no second invitation to shoot home.

Amy Costello scored her first goal in a Great Britain shirt from a penalty corner to give her team the lead. The corner was won after a period of intense Great Britain pressure on the Japanese goal.

It was nearly three when Great Britain had a penalty corner on the stroke of half-time. Japan were reduced to two defenders but goalkeeper Megumi Kageyama pulled off a great save from close range to keep her team's hopes alive.

The second half saw Japan up the pressure on their higher-ranked opponents and at the back of both teams' minds was the previous encounter when Japan had overturned a 2-0 deficit to force a draw. Mami Karino came closest to equalising when she was one-on-one with goalkeeper Amy Tennant. The 'keeper stood tall and deflected the shot over the post. Seconds earlier Sophie Bray had found herself as the last line of defence as she batted an attempt by Minami Shimizu off the line.

"That was just so important to finish with a win," said Amy Costello after the game. "It will make us view the tournament in a very different way."

For all the results and news from the Wanglibao Hockey Champions Trophy Changzhou Wujin, click here.