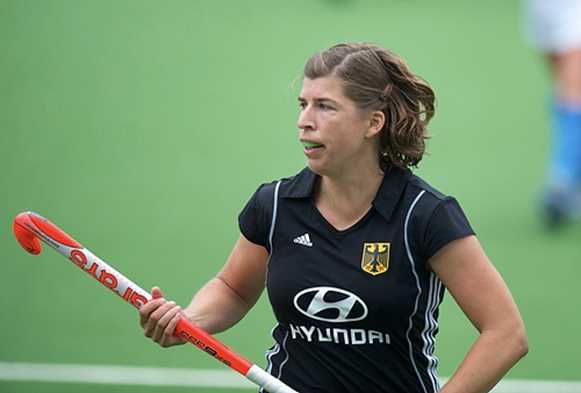 Star Germany striker Natascha Keller has reached the remarkable landmark of playing her 400th* international match, helping her team to a 6-0 victory over Chile. Keller becomes the first ever woman to reach such a landmark, and ensured that the day would be even more memorable by scoring her 198th international goal in the fixture.

Making her international debut in October 1994 and known as “Taschi”, she was named Player of the Year by the FIH in 1999. Born in Berlin, she plays domestically for Berliner Hockey Club. Natascha became the fourth member of the Keller Dynasty to win a hockey medal in Olympic competition when Germany took the Gold medal at the 2004 Games in Athens. The family's list of accolades stretches back to her grandfather Erwin, who won Silver at the 1936 Olympic Games in Berlin. Her father Carsten won Olympic Gold at Munich 1972, her brother Andreas won Silver both in Los Angeles 1984 and Seoul 1988 before winning Gold at Barcelona 1992. The most recent addition to the Keller Olympic medal haul came at Beijing 2008, when Natascha's younger brother Florian helped Germany men claim the Gold medal.

Germany are preparing in Santiago, Chile for the FIH Champions Trophy. Team coach Michael Behrmann will announce his squad for the tournament on Monday, before his team heads to Rosario on Tuesday.