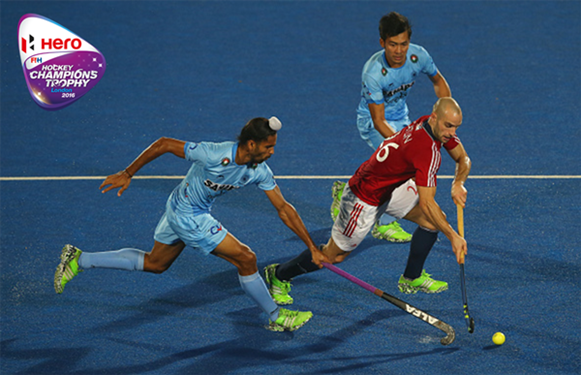 Who will run away with this year's Hero Hockey Champions Trophy title? Photo: FIH/Getty Images

This Friday (10 June), Lee Valley Hockey & Tennis Centre will open its doors and welcome thousands of sports fans eager to witness the 'Best of the Best' at the men’s and women’s Hockey Champions Trophies 2016.

The London 2012 Olympic legacy facility is playing host to the last major international hockey competitions before the 2016 Olympic Games in Rio, Brazil.

Of the 12 teams competing in London, 11 will be in action in Rio. With the matches taking place in Queen Elizabeth Olympic Park, host of the 2012 Games, the Hockey Champions Trophies will officially kick off the sport’s Olympic celebrations.

Friday’s action gets underway at 16:00 (UTC/GMT +1) with a mouthwatering clash between title holders Germany and the ever-improving India.

Although they have not been at their brilliant best in recent months, Die Honamas have a reputation for getting it right in Olympic year and with world class players like midfield star Tobias Hauke, defensive rock Martin Häner and extraordinary striker Florian Fuchs (FIH Young Player of the Year 2012), they certainly have the firepower to make a solid defence of their Champions Trophy title.

India will prove to be a stern opening challenge, and following their third place finish at last year’s Hero Hockey World League Final in Raipur, are a side packed full of confidence, as made clear by Manpreet Singh ahead of the event. “We don’t feel scared to take on big teams anymore”, said the 23-year-old midfielder. “We don’t think ourselves as underdogs anymore. In fact, we will go with the confidence that we are as good as any other team if not better.”

The second match of day one, starting at 18:00 will see European giants Belgium take on Korea - a team that booked their ticket to the Hero Hockey Champions Trophy 2016 by winning the 2014 Hockey Champions Challenge.

Belgium’s Red Lions have earned a reputation as one of the world’s most feared attacking sides, with striker Tom Boon and midfield star John-John Dohmen being two of many exceptional players amongst their ranks.

The Koreans have numerous stars of their own, including veteran striker Seo Jong-ho, who first made an appearance in the Champions Trophy way back in 1999.

The final match of the day one schedule takes place at 20:00 and will see home favourites Great Britain – a side containing the respective talents of attacking duo Barry Middleton and Ashley Jackson – get their campaign underway against reigning World Cup and World League champions Australia.

“It's the first Champions Trophy any of us have played on home soil and it is a tournament that we want to win for the first time”, said Great Britain defender Dan Fox, speaking to Planet Hockey Magazine. “Everything we do this year is part of our Rio preparation. That said, the Champions Trophy is a major trophy and we will be trying full out to win it.”

The mighty Kookaburras will be determined to add to their record haul of 13 Hockey Champions Trophy titles here in London, and with the likes of Eddie Ockenden, Chris Ciriello and Blake Govers amongst their ranks, they have every chance of doing so.

The round-robin games of the men's Hero Hockey Champions Trophy 2016 will conclude on Thursday 16 June, with the classification matches and showpiece final taking place on Friday 17 June.

The women’s Hockey Champions Trophy 2016 begins on Saturday 18 June and runs through to Sunday 26 June.

It promises to be two weeks of action packed, world class hockey that will be enjoyed not just by the fans in the stadium but also by a global broadcast audience of millions.

Looking ahead to the showpiece events, FIH President Leandro Negre said: “The prestigious Champions Trophies are considered to be hockey’s entertainment showpiece events. They are always fiercely competitive and the line-up for the events in London – the last elite international competitions before the Rio 2016 Olympic Games – ensures that the 2016 editions will be extra special.

“The hosting of innovative and exciting entertainment events is a key goal in FIH’s Hockey Revolution strategy, which is designed to raise the global status and popularity of hockey in a bid to reach our ambition of becoming a global game that inspires the next generation. With exceptional action on the field and fan-focussed entertainment all around the venue, we know that a very special time awaits everyone attending the events in London.”

Tickets for both events are still available and can be purchased by clicking here.

The FIH You Tube channel will be extremely active during the event, with match highlights and much more being posted as soon as they become available. In some territories, live matches may also be shown. To visit our You Tube channel, click the link below.
www.youtube.com/hockey