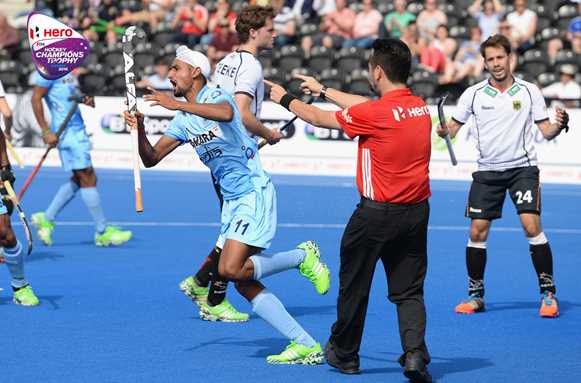 The Hero Hockey Champions Trophy 2016 got off to an entertaining start, with 2014 Champions Challenge winners Korea claiming a shock win against Belgium to lead the standings at the end of day one in London.

Olympic and World League champions Germany began their Hero Hockey Champions Trophy 2016 title defence with a 3-3 draw against India, fighting back from 3-1 down to claim a point in the opening match of the event.

Germany youngster Tom Grambusch made his mark on the game with two goals before a late penalty stroke from Jonas Gomoll claimed a draw. VR Raghunath, Mandeep Singh and Harmanpreet Singh were all on target for a confident India team that were exceptional at times.

“We had our opportunities and we could have finished the match earlier, but we missed some really good chances in the last quarter”, said India’s Raghunath after the match. “It’s ok, a draw is a good thing against Germany, but we want to do even better going forward.”

Germany’s Oskar Deecke was reasonably satisfied with a draw, but hinted that there is more to come from his Germany team. “It was a good start against a good team, and we fought back well I think. It was a fair result, but we want to come back stronger for tomorrow’s match against Belgium.”

2014 Champions Challenge winners Korea (WR: 9) upset the Hero FIH World Rankings with a surprise 2-0 win over Belgium’s Red Lions (WR: 5) thanks to strikes from Yang Jihun and Jung Manjae. Although the Koreans will be justifiably delighted with the result, Belgium will rue the absence of injured penalty corner stars Tom Boon and Loïck Luypaert, with the team failing to convert any of their nine penalty corner attempts while Korea scored from their only penalty corner opportunity of the match.

Korean veteran Seo Jongho, who made his Champions Trophy debut way back in 1999 and has returned to international duty after an absence of three years, said:  “Before the match, we were a little bit worried, as we have so many young players who are playing their first tournament, and the Champions Trophy is a big tournament. Today’s match was very hard, but hopefully after the game we can start feeling better and our young players can learn from this good experience today. I want them to enjoy this tournament.”

Host nation Great Britain claimed a point against reigning world champions Australia, holding the top ranked Kookaburras to a 0-0 draw in the final match of day one.  Despite surviving a barrage of penalty corners in the first quarter, the home favourites gave a fine performance in front of their fans but could not reward their excellent support with goal.

“It was so cagey, one of the most unusual matches between Great Britain and Australia imaginable”, said Great Britain Head Coach Bobby Crutchley after the match. “We defended pretty well, we had to for periods, particularly in the first half. Not a bad start to the event, and certainly some good individual performances but we want to improve from here on in.”

Kookaburras Head Coach Graham Reid said: “We created a lot of opportunities, we had a lot of corners that we unfortunately didn’t put away. It was a mix perhaps of execution issues, but also perhaps that Great Britain defended very well and we just have to work a little bit harder on different variations. A lot of today was getting used to the conditions here, and we did play very nicely.”