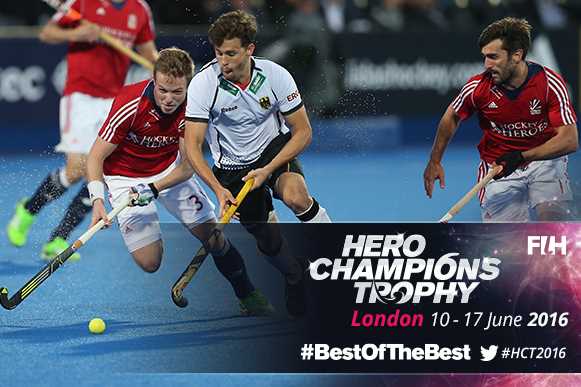 Australia’s Kookaburras have secured a place in the competition final at the men’s Hero Hockey Champions Trophy, but their opponents in the showpiece gold medal match still remains a mystery. India, Great Britain and Belgium are all still in the running ahead of the final round of pool matches on Thursday.

The Aussies hard-fought 2-0 win over Belgium proved to be enough for a final berth, while India’s 2-1 victory over Korea means that they ended competition day four on seven points, two points clear of Great Britain, who tied with title holders Germany in the final match of the day to end their opponent’s chances of defending their crown.

To qualify for the gold medal match, home favourites Great Britain need Australia to beat India in Thursday's first match before they in turn require victory against Belgium, a team that currently remains in the hunt for a final spot, in the evening game.

The pool phase of the competition will conclude on Thursday (16 June) with Australia taking on India at 1600 (UTC/GMT +1), Korea versus Germany at 1800 and Great Britain playing Belgium at 2000.

Match 10: India 2, Korea 1
India bounced back from conceding a late equaliser to defeat Korea in the first match of the day four to keep alive their chances of reaching Friday’s competition final. The result moves the Asian champions onto seven points from the four matches they have played at the Lee Valley Hockey and Tennis Centre.

Lively India attacker SV Sunil, who was captain for the day, started and finished a brilliant attacking move to give his side a 1-0 lead nine minutes after half time. A cool deflection from Kim Juhun three minutes from full time looked to have sealed a point for Korea, but India hit back seconds later through Chandanda Thimmaiah who scored from close range after a defensive error from the Korean side.

“We had a lot of chances up front but we couldn’t convert”, said India striker Manpreet Singh. “I think overall our team performance was very good because we conceded a goal late but in the next minute we hit back with a goal of our own.”

The contest - a rematch of the title match at last year’s Hero Hockey World League Final, which Australia won 2-1 - was close throughout, although it was the Australians who proved themselves most deadly in front of goal. Glenn Turner broke the deadlock eight minutes after half time, volleying in from close range before White drilled home from the top of the circle eleven minutes from the end. It was White’s fifth goal in 79 appearances, but second in successive matches following his strike in Australia’s victory over Germany on Monday.

“I don’t score too many goals, as everyone keeps reminding me”, said Australia’s Tristan White, a player clearly relishing stepping up from the defensive line into the Kookaburras midfield. “They are just falling for me, I am just the guy in the right place at the right time. I’d say that they are team goals forced through pressure, but if someone is going to be there to hit it in and that is me than I’m happy with that.”

Match 12:  Great Britain 1, Germany 1
A fourth quarter penalty corner from Ashley Jackson earned Great Britain a crucial point to keep alive their chances of reaching the competition final. However, the 1-1 result has ended Germany’s interest in defending the title they won in Bhubaneswar, India in 2014.

“I think we’d love to be sitting here right now in Australia’s position, knowing that we’ve pretty much reached the final and we can be looking forward to that", said Great Britain goalkeeper George Pinner. “That said, we are still in the running and that is what we said we wanted at the beginning of the tournament. We want to be competing for that and hopefully by the time we come to play Belgium we will know that we can still make the final.”