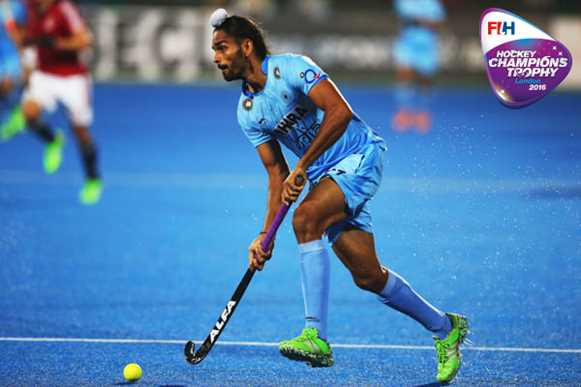 Akashdeep Singh and his team will be aiming for top spot in London Photo: FIH/Getty

India have never won the Hockey Champions Trophy but the eight time Olympic champions have in recent years been showing signs that a return to the glory days of old might be just around the corner. Following a ninth place finish at the 2014 Rabobank Hockey World Cup, the team produced a string of high quality performances to claim the silver medal behind World Champions Australia at the 2014 Commonwealth Games in Glasgow, Scotland. That success was a sign of even greater things to come, with India storming to glory at the 2014 Asian Games to seal their place at the Rio 2016 Olympic Games by defeating eternal rivals Pakistan in the competition final before landing a fourth place finish at the end-of-year Hero Hockey Champions Trophy on home soil in Bhubaneswar. 2015 saw even greater improvement, securing a fourth place finish at the FINTRO Hockey World League Semi-Final in Antwerp, Belgium, early in July before securing the bronze medal at the end-of-year Hero Hockey World League Final event in Raipur, India.

The team coached by legendary Dutch tactician Roelant Oltmans – who guided the Netherlands men to Olympic and World Cup glory in 1996 and 1998 respectively – has made a promising start to 2016, with the side claiming the silver medal at the Sultan Azlan Shah Cup in Malaysia. Defender Harmanpreet Singh, one of the outstanding performers at the Sultan Azlan Shah event, finds himself retained in the squad, as areyoungsters Harjeet Singh and 21-year-old goalkeeper Vikas Dahiya. Gifted goalkeeper P.R. Sreejesh and drag-flicking defender VR Raghunath, both rested for the event in Malaysia, have returned to the squad and will provide a strong backbone to an impressive looking Indian squad. Sreejesh has been named captain of the team in the absence of brilliant midfielder Sardar Singh, who has been rested for this event. S.V. Sunil and Akashdeep Singh are two star performers in the forward line who are both capable of making a big impact in any game.

Will they win their first ever Hockey Champions Trophy in London? They are certainly in with a good chance!

Coach comment – Roelant Oltmans: “It is important that we approach the tournament not just with a view to winning it, but also to execute our tactics well, and learn from past mistakes and keep evolving. This will ensure that as a team we are prime placed when we reach Rio, physically, mentally and tactically.”

Player perspective – Manpreet Singh (midfielder): “We don’t feel scared to take on big teams anymore. We don’t think ourselves as underdogs anymore. In fact, we will go with the confidence that we are as good as any other team if not better.”

One to watch: P.R. Sreejesh. One of the most athletic goalkeepers in the game, 28-year-old Sreejesh is a sensational shot-stopper and a hugely respected figure within the Indian team. Sreejesh looks set to make his 150th international appearance in London.