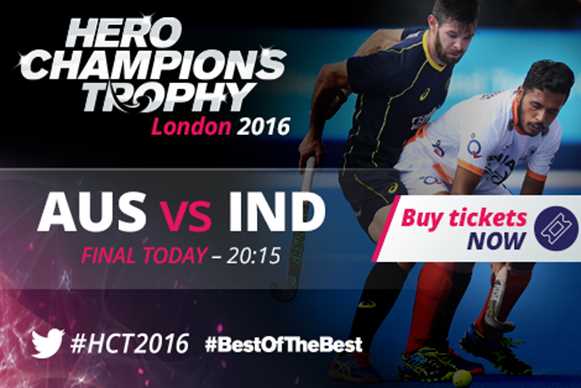 After five days of top class action at the London’s Lee Valley Hockey and Tennis Centre, we now know the teams that will compete for the chance to lift the Men's Hero Hockey Champions Trophy 2016.

Reigning World and Hockey World League champions Australia will take on a resurgent India in what is expected to be a huge crowd at the London 2012 Olympic legacy facility.

The Kookaburras, who also sit top of the Hero FIH World Rankings, have been in excellent form throughout this event, and in Tristan White they have one of the players of the tournament. Despite having played most of his matches for Australia in the defensive line, Head Coach Graham Reid’s promotion of White into midfield has proven to be a master-stroke and has seen him take his international scoring tally from three goals in 75 caps to six in 80.

White is just one of many stars in the world class Australia line-up, with Blake Govers and Aran Zelewski also proving themselves to be on top form. They will be aiming to fire the Kookaburras to their 14th Champions Trophy success, extending their own record haul of CT titles.

Although Australia will start the match as strong favourites, India have shown more than enough quality in this competition to suggest that they are capable of claiming their first ever Champions Trophy gold medal. Head Coach Roelant Oltmans has been richly rewarded by his decision to give youth a chance at this event, with his rising stars proving themselves to be more than ready for the global stage. 20-year-old Harmanpreet Singh has made a big impression on this event, as has Mandeep Singh, who will be looking to add to the three goals he has scored so far in a bid to help India win the last major competition before the Rio 2016 Olympic Games.

As well as the gold medal match, home favourites Great Britain will face in-form Germany in the battle for bronze while Belgium and Korea go head-to-head in the 5-6 classification match. It is sure to be a thrilling day of action, so be sure to follow us on all of our channels.

Get your tickets now by clicking here.