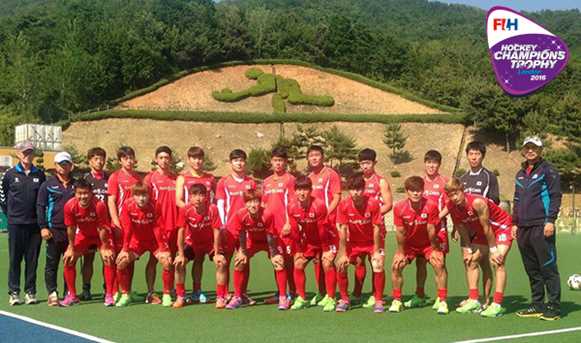 Korea will be looking to improve on recent results at this year's Hockey Champions Trophy Photo: Korea Hockey

Over many years, Korea earned a big reputation thanks to a long period of excellence at both Asian and world level events. Ranked ninth in the FIH World Rankings, Korea have competed in every Hockey World Cup since 1994 and every Olympic Games since 1996. However, the team’s failure to qualify for the Rio 2016 Games means that their Olympic record will end this summer.

The squad selected for the Hockey Champions Trophy in London contains three men who have played over 200 times for Korea. Team captain You Hyo-sik, Lee Nam-yong and legendary 36-year-old striker Seo Jong-ho – who competed in the Sydney 2000, Athens 2004, Beijing 2008 and London 2012 Olympic Games – ensure that there are some experienced heads in a group that features 12 players that are yet to reach the 50 international appearances marker.

Head Coach Song Seung-tae has selected two uncapped players for this event, with 20-year-old Seo Woo-hyeong and 18-year-old goalkeeper Kim Jae-han both being tipped as possible stars of the future.

Earlier this year, Korea travelled to New Zealand (WR: 13) to face a series of matches against their Black Sticks and Malaysia (WR: 13). However, they struggled to find form, losing three and drawing three of the six matches played.

Despite the win-less run, it proved to be something of a breakthrough series for 25-year-old penalty corner expert Yang Ji-hun, who scored five times. He will be hoping to continue his excellent form at the event at the Hockey Champions Trophy in London.

One to watch: Seo Jong-ho. One of the all-time greats of Korean hockey, Seo was recognised as one of the world’s most feared forwards for well over a decade. He has been out of the limelight for a number of years, but a recall suggests that he is still more than capable of having an impact in London. It will be Seo’s eighth Hockey Champions Trophy campaign, having made his HCT debut at the 1999 event in Brisbane, Australia.