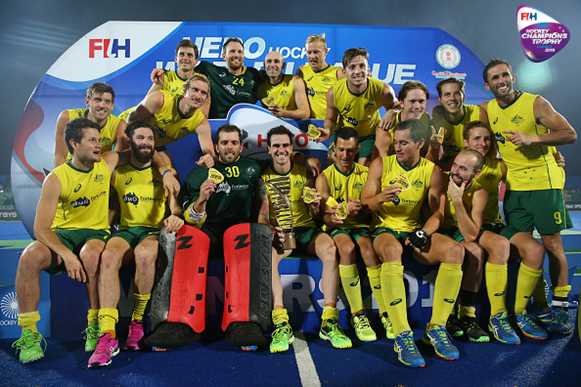 Australia's Kookaburras - just try and knock them off top spot!

"What better preparation for Rio than winning the last major, just before the Olympics take place," says Tim Deavin – or Deavo – as he is known among his Australian team mates. "We go to every tournament to win and anything less is a failure. We will be giving players the opportunity at Champions Trophy to play for Olympic selection. So, like most tours, it is not necessarily our strongest team at the time; while saying that we still we have a team mix with the purpose of winning."

It is a point that team mate Jake Whetton agrees with. "We go to every tournament with the intention of being in the main game at the end of the tournament. It's our last major hit out before the Rio Olympics and for every athlete it is another opportunity to show the coaches and selection panel what we have and pushing for final selection for Rio."

While no team selection is set in stone, Whetton's record of 42 goals from 99 games and a list of medals and wins to his name that includes a Hockey World Cup, a Hockey World League winners medal as well as a recent first place finish with the Hockey India League team Jaypee Punjab Warriors, would suggest the 25-year-old would be among the first names on the team sheet.

However, no-one in Australia's Kookaburra colours takes anything for granted and the level and intensity of training the players go through to secure selection is eye-wateringly tough.

Deavin describes a typical training week: “We train six days a week, all year round. In an Olympic prep period we do have more contact hours, we have extra meetings, these include scouting, yoga, Pilates, psyche, game learnings. But our physical time spent on the pitch is essentially the same. Training on pitch for six days can’t really be increased without negative consequences on player performance. Our schedule consists of four group turf sessions, two individual turf sessions, one set play session, two gym sessions, one psychological meeting, two team development meetings and one yoga session. So it’s a pretty full on week and is definitely draining. We run on average 30kms a week in training.”

And, while they might be World Cup winners and the world number one team, Australia is a team that is constantly evolving. Both Deakin and Whetton struggle to explain the culture and belief within the Kookaburra camp, but both players agree they are a side where small changes are constantly being made to ensure they stay at the top of their game.

“It’s hard to identify from within,” says Deavin, “As with most sports teams the way of playing and the culture is constantly changing and evolving. I’m sure there a bunch of differences but as they are constant small things I cannot give a definitive answer.”

And what about the complacency that often creeps into teams that constantly win? Is there a danger the Kookaburras might take their eye off the ball?

Whetton’s answer is definite: “The past is the past, 2014 was an unbelievable year [Australia won the Hockey World Cup and Commonwealth gold], but we can't rely on that any more. Even last year with our results in Belgium [FINTRO Hockey World League Semi-Final] and India [Hero Hockey World League Final] we are still playing great hockey to win major hockey tournaments but we don't go into any game just expecting to win. If we did we wouldn't see the results we are seeing.”

And his teammate concurs: “We are always 'expected' to win. This comes with the territory of being ranked the number one team in the world. It can have a negative impact but not necessarily on motivation, but rather or positive motivation for other countries. For those striving to hunt the leader it is easier to do than to stay ahead.

“There is a lot of pressure on the team to perform and come away from the Olympics, and every other tournament, with the gold. Success has affected us as a group in the past. Is it now? I don't think so, only time will tell."