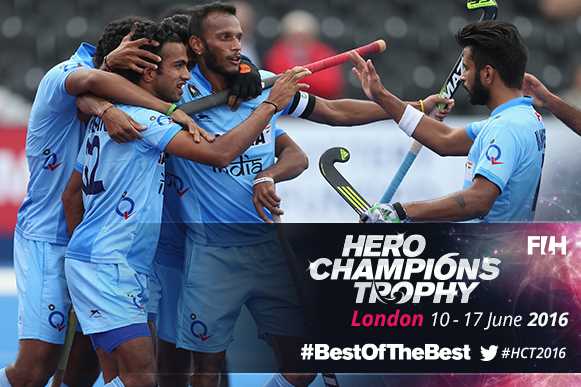 The final of the Hero Hockey Champions Trophy 2016 will be played between Australia and India following a dramatic day of action at the Lee Valley Hockey and Tennis Centre in London.

A third goal in three matches from Tristan White helped the World champions to victory over India in their final pool match, but they now know that the Asian champions will be their opponents in Friday’s title match.

The Kookaburras had to wait for the outcome of the evening’s match between Great Britain and Belgium before knowing who their fellow finalists would be, with India hoping that the Brits and the Belgians would draw in order to seal their safe passage into the gold medal game.

Remarkably, India got exactly what they wished for, as GB fought back from 3-1 down to draw 3-3 with the Red Lions thanks to late strikes from David Ames and Barry Middleton.

That result meant that Great Britain would face Olympic champions Germany in Friday’s bronze medal match. The Germans sealed their place in that match by powering to a 7-0 victory over Korea, with Constantin Staib and Oskar Deecke both scoring twice.

The men’s Hero Hockey Champions Trophy 2016 will conclude on Friday (17 June) with Belgium taking on Korea in the 5-6 classification match at 1500 (UTC/GMT +1) before Germany and Great Britain go head-to-head for bronze at 1800. The showpiece final begins at 2015, with India hoping to upset both the form book and the FIH Hero World Rankings when the face an Australia team looking to claim a record 14th Champions Trophy title.

The majority of the match was closely contested, although it was the Australians who went into half time with a 2-0 lead thanks to strikes from Trent Mitton and captain for the day Aran Zalewski. The Kookaburras added a third through Flynn Ogilvie before India captain VR Raghunath pulled a goal back with a trademark penalty corner, although Australia restored the two goal advantage seconds later when Tristan White continued his remarkable tournament by scoring his third goal in three games. A Mandeep Singh strike early in the fourth quarter gave India genuine hope, and they could have rescued the game were it not for Australian shot-stopper Tyler Lovell, who made numerous saves to help the Kookaburras to victory.

“It’s always a tough one, the match before you go into the final”, said Australia striker Blake Govers. “We went out there to try and keep the momentum going, and we started off not too bad and got a bit of a lead. Then we started to slack off and they showed what good teams can do and they came back to hurt us. I’m glad to come away with the win and I’m looking forward to the final tomorrow.”

Constantin Staib and Oskar Deecke both scored twice as Olympic champions Germany produced a superb performance to overpower Korea and seal their place in the bronze medal match. The result was Germany’s biggest ever victory at a Champions Trophy, surpassing their 6-1 win over Spain in Karachi way back in 1981.

Staib started and finished the scoring with field goals, with Tom Grambusch, Deecke, Timm Herzbruch, Deecke again and Marco Miltkau all registering in between as Die Honamas produced their best performance of the competition. Although they will not defend the title that they won in Bhubaneswar, India two years ago, the youthful Germans have lost just once in this competition and continue to improve with every game.

The performance of the team was really outstanding today”, said Germany striker and captain Florian Fuchs after the match. “We were desperate for that win because we were not able to win in our first four matches here. We are a really young squad and have a lot of new players on the team. These young guys have performed and they have a big future. German hockey has nothing to worry about, I think.”

Belgium’s Red Lions needed less than 40 seconds to take the lead against the home favourites, with Thomas Briels guiding a cross into the roof of George Pinner’s net before GB captain Barry Middleton levelled with a penalty corner deflection five minutes before half time. Belgium’s Loick Luypaert gave his side a 3-1 lead with a brace of penalty corner drag-flicks either side of the break, putting the Red Lions within one goal of sealing their own place in the competition final. However, Great Britain’s decision to replace their goalkeeper with an outfield player with six minutes remaining proved significant, with David Ames and Barry Middleton tying the match as the Belgians lost their discipline.

I think we’ll look back on that match and think it was really one that we should have won”, said Great Britain midfielder Harry Martin after the match, knowing that victory would have secured a place in the event final against Australia’s Kookaburras. “I think we controlled large parts of it and obviously it got pretty crazy towards the end. In the end we were pleased with a draw, but we definitely wanted a lot more from that match.”

Despite the disappointment of not reaching the final, Great Britain still have a chance of medaling at the event when they face Olympic champions Germany in Friday’s bronze medal match.