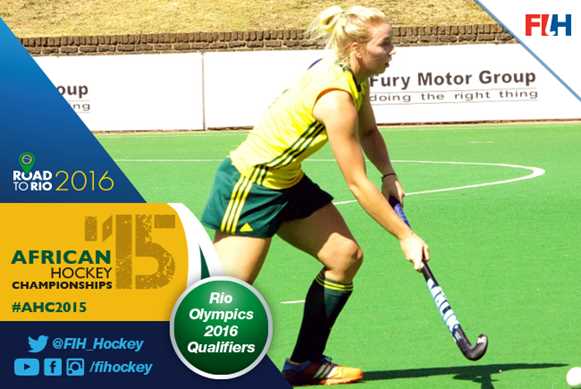 South Africa sealed their position as the African Champions for the sixth consecutive time as they won their final round robin match against Ghana (FIH World Ranking: 31) with goals coming from Jade Mayne, Dirkie Chamberlain and Lilian du Plessis.

The team ranked 11th in the world have not been beaten in this event since their first appearance in 1994 and this year they dominated every game, scoring 68 goals in six games and conceding none. Despite losing their final game, Ghana finished the tournament in second place as their closest rivals, Kenya, lost to Nigeria.

In the final matches of the women's Greenfields African Hockey Championship 2015, Tanzania were beaten by Namibia by an 11-0 scoreline. The result means Namibia finished in fourth place, while Tanzania will be disappointed to be the only team not to win a game or score a goal at these Championships.

Namibia’s goal-fest began in the sixth minute when Dunelle van Taak scored from a penalty corner. The lead was extended in the first quarter as first Zalia Duvenhage and then Ina Louis added goals in quick succession.

The game really belonged to Namibia’s 24-year-old striker, Alanda Botha, who netted four goals during the match – two well-taken penalty corners and two goals that were the result of build-up play that carved through the Tanzania defence.

Duvenhage and Ina both scored second goals, Bernice Brink got onto the scoresheet and Tanzania’s misery was complete when Phia Gerber scored with the final action of the match.

Kenya (World Ranking: 37) will be hugely disappointed that they were unable to end this event with a win. The Kenyan team has played exciting hockey throughout the competition, but against the speed and strength of the ever-improving Nigerian team (World Ranking: 53) they had no answers.

It was Kenya who actually took the lead in the third minute of play. A foul in the circle led to a penalty stroke, which Teresa Nekesa calmly slotted home, but that early set-back was the wake-up call needed by coach Abdullahe Ndanababa’s team and Nigeria rose to the challenge with gusto.

It was Eleho Ovoh who did the damage, the 22-year-old scored a hat trick, with three goals scored from open play. Her vision and reading of the game mark her out as a player to watch in the future.

The other match of the day was in effect a final as it pitted first placed team versus second placed team. South Africa, by virtue of their world ranking and experience, would have been devastated by anything less than a win, but Ghana are an aspirational side, who have been impressing everyone with their raw talent and drive to succeed.

However, South Africa didn’t take their eye off their target and soon settled into a rhythm. The difference between the teams was structure when in possession and composure when breaking down the opponent’s play.

The first goal was scored in the seventh minute when Jade Mayne latched onto a ball to fire home past Abigail Boye in the Ghana goal.

Dirkie Chamberlain added to her own personal tally of 10 goals in the whole tournament when she scored from a penalty corner at the end of the first quarter and then Lilian du Plessis put the game beyond Ghana’s reach with a fine penalty corner strike in the 31st minute. This goal meant that du Plessis was the top goal scorer by some margin, with 18 goals to her name.

Ghana never gave up hope, and fought for every ball for the remainder of the game, but this was a lead that South Africa were never going to let go of.

After their win, Captain of the South Africa women’s team, Nicolene Terreblanche, said: “It was our goal to win this  tournament. We came out to prove ourselves and we are really proud to have done this. It is important for our world ranking and we will keep going on our programme.”

Sheldon Rostrum, the South Africa Head Coach, added: “We set ourselves a target to win this. We wanted to qualify for Rio through Valencia and we didn’t achieve that, but we knew we had to win this tournament and give ourselves every chance.”