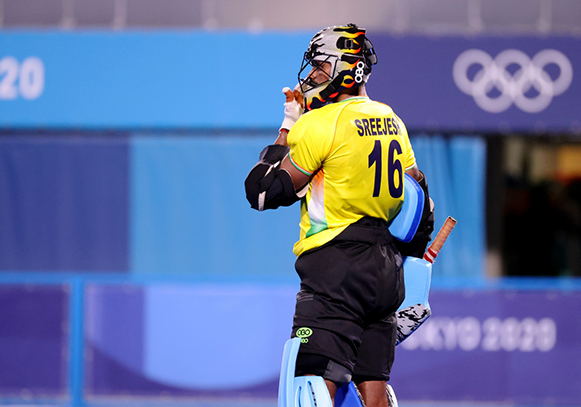 As reported on the FIH website earlier this month, ace India goalkeeper PR Sreejesh has been shortlisted for the prestigious World Games Athlete of the Year for 2021. The voting for this coveted prize – which was won by Sreejesh’s compatriot and India women’s captain Rani in 2019 – is currently live, with all fans of the sport having the chance to vote by clicking here.

Earlier this week we caught up with the Tokyo 2020 Olympic bronze medallist and FIH Goalkeeper of the Year for 2021 to congratulate him on his nomination, his memories of that momentous medal-winning performance against Germany in Japan as well as his hopes and ambitions for the year ahead.

FIH: Thanks for joining us, Sreejesh! How are you?
PR Sreejesh: “Thank you very much, I’m doing great! The team has just got together in Bangalore, training for the Pro League. So quite excited and a bit worried also!

FIH: Firstly, congratulations on being nominated on The World Games shortlist for Athlete of the Year – you must be very proud!
PR Sreejesh: Thank you very much! It is a very great honour for me because, so far, whatever award I have achieved has all come from ‘the hockey family’. The best goalkeeper awards have all been related to hockey, but this time it comes from the collective sport (world), which for me is something I’m really honoured (about).”

FIH: I’m sure you’ll continue to get lots of votes from the fans before the deadline at the end of this month – we wish you all the very best on that! Talking of fan votes, the FIH fans selected India’s bronze medal winning match against Germany from the Olympic Games Tokyo 2020 as their third favourite of 2021, although I suspect it might be at the top of your list! How do you look back on that 5-4 victory?
PR Sreejesh: “Wow, that is one of the toughest questions you have ever asked me! You know, while you are playing that match, you don’t feel any pressure. But once you’ve done with the match, you think about moments again. I don’t know how I saved that last [penalty corner shot], seriously. Even when I think about that situation now, I feel some sort of pressure, which was the pressure that all the fans had been through. For me, that was a great fight from the India side. We were there at the Olympic Games with a lot of young players, with ten debut Olympians in that team. When Germany took the lead, they were totally controlling the game. That is when I felt a doubt about my team, but they never let the game go. They just worked hard, did everything they could, got the right goal at the right time, got the lead and yes, we ended up with a 5-4 victory. It was an historical moment for India. We have a very great hockey history as we have the highest number of gold medals at the Olympics, but at that moment in 2021, and for the youngsters, we hadn’t showed them any big achievements. [Winning bronze] was a revolution for Indian hockey, inspiring a young generation. So, for me, that was one of the best moments of my career.”

FIH: It was a first Olympic medal for 41 years, so you did well to cope with the pressure. How important was this medal for the fans of hockey in India, where the sport is so huge?
PR Sreejesh: “For me, my experience helped me to cope with the pressure. For all the senior players, the best thing we did was sharing our experience [with the younger players]. We told them that the Olympics is all about handling the pressure. When you are under pressure, if you manage to apply the basics in the right way, then you can capture the game. I think that is important and we succeeded there. For the fans, I think this medal created a great change. As I mentioned before, the younger generation has never seen any big achievement from the India men’s national hockey team. Yes, we have won the Asian Games and medalled in Commonwealth Games, but they are not the big achievements. People always search for the big ones, like World Cups or Olympic Games. When we brought that bronze medal into the country, the younger generation were inspired by that. People started to think ‘yes, we can find a future in hockey’. They started to believe in us, dreamed of playing for their country, competing in Olympics, and winning Olympic medals. Parents started encouraging their kids to take up hockey. I think that is a huge revolution! Academies started bringing in more kids, schools started wanting their own hockey teams, and most districts started their own hockey teams. The revolution has already started, but it’s on us now how we want to push that. If you keep on winning, people will get more inspiration and that will definitely bring the game to a much higher level.”

FIH: You mentioned that you’d like to keep inspiring the future generations by winning more competitions, and 2022 is a busy year of hockey for you and your team.  What are your big ambitions for the year ahead?
PR Sreejesh: “2022 is going to be really packed for us. We start this year with Pro League which is followed by Asia Cup, Commonwealth Games and then Asian Games. Then, in 2023 at the start of the year we have the World Cup, which we are hosting in Odisha. The prime tournament for us is the Asian Games, which is the direct ticket for us to Paris (2024 Olympic Games), so we are giving more importance to Asian Games. But as the hosts for the World Cup, it is a very important thing. A good year will help us to achieve these two targets. Pro League gives us the best platform to play against the top teams in the world, and it is the right platform for us to develop the second string of players, giving experience to the youngsters. So, by the time they reach the Asian Games or the World Cup, they will be mentally and physically prepared. Also, the Asia Cup as well – we need to stamp it that we are the Asian champions. It is a really tough year for us, and a really tough year for the youngsters to prove themselves and seal their place in the national hockey team.”

FIH: You have some FIH Hockey Pro League matches on the horizon. What are your thoughts about those?
PR Sreejesh: “We are expecting to start the tournament in South Africa early next month. But there is a lot [happening] with the pandemic all over the world, and we are not certain about that. Still, we are hoping for the best and just working hard as if the tournament is on and that we will definitely participate there. There are a lot of negative stories flashing around, but still, we are not giving any importance to those at all. We are just focussing on that Pro League is going to happen, and we need to practice for South Africa now.”

FIH: Thanks again for talking to us, and the very best of luck for everything in 2022 and leading into 2023.
PR Sreejesh: Thank you very much!