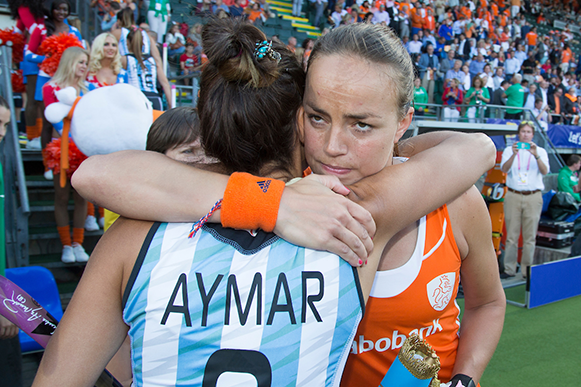 In Part 2 of our special interview with Netherlands great Maartje Paumen, the double Olympic gold medallist talks about how her record-breaking individual achievements paled into insignificance compared to the importance of success for the teams she represented.

Maartje also gives her thoughts about how the Netherlands women’s team are shaping up for the Olympic Games in Tokyo, the best players she played both with and against, as well as the excitement surrounding some very special personal news for Maartje and partner Savannah Hamming.

You set numerous scoring records during your playing career, including two very significant Olympic markers. At Beijing 2008 you helped the Netherlands win gold by scoring 11 times, the most ever by an athlete in the women’s competition. Following further goals at London 2012 and Rio 2016, you are the highest female scorer in Olympic history with 19 goals. You have also scored more international and Hoofdklasse goals than any other Dutch woman in history. Whilst in your playing days you always stated that the success of the team was more important than anything else, have these records taken on greater significance to you in the years since you retired?
Maartje Paumen: “I think so, because when you are playing you have so little time to think about the tournaments you have won or the gold medals. When I retired, I had more time to think back or see it on TV, you think that was a really good time, and it was a nice time that I had as a player. The only thing I was thinking was always about wanting to win the tournament. I was always thinking about the team, and not about the records. When I retired, it is nice to have those records, that you see your name sometimes on the lists. But when I was playing the only thing I was thinking was ‘I want to win this tournament’, or ‘I want to win this game, no matter what’. When I see myself playing a few years back, I can see it on my face that I only wanted to win. It was always game face on.”

The Netherlands women have been in superb form over the past few years, and will go into the Tokyo Olympics as favourites to reclaim the gold medal. What are your thoughts about the current group, and which teams are the biggest threat to the Oranje’s gold medal quest?
Maartje Paumen: I think that they are still an amazing team. They have so many good players, so much talent. In my opinion, they are the number 1 for Tokyo, if we can play. I haven’t seen them play for a few months already because of covid, so it is not easy to tell you who is going to win the Olympics, but if look to the other countries, Germany is always a really good team. Of course, Argentina, as always. It’s always a big battle between Netherlands and Argentina. I think those teams are threats for the Oranje. Yeah, but I think the Oranje can go for the gold medal in Tokyo. They still have so many good players; a good goalie, a good penalty corner, so I’m going for the Netherlands!”

I wouldn’t expect anything less, Maartje! You were twice named FIH Player of the Year, winning the crown in 2011 and 2012. Can you tell us the best players you played both with and against during your career, and what made them so good?
Maartje Paumen: I’ll start with who I played with. I have two. The first is Minke Booij, who I played a lot of years together with for the club and also with the national team. I think she was an outstanding defender. She had no fear, she would go for every ball. She was also a great leader of the team, so I learned a lot of things from her. Number two, I’m going for Naomi van As. She was also a really good team-mate. Her skills were amazing, and she had so much stamina – she could go on and on.  She always wanted to win, so it was really nice playing with her over the years. I think I played 12 years on the national team with her. Who I played against, I think it was [Luciana] Aymar [of Argentina]. We played 12 years against each other, and they were always really big battles between Argentina and the Netherlands. What she can do with a ball is crazy. Her skills were fantastic, and also, she was a really fast player. I wasn’t, so it was always a big struggle to face her! She was a really good one and was named seven or eight times the best player in the world, so I’m going for her.”

It has been lovely catching up with you. Finally, we understand that you have some happy news! Would you like to us more?
Maartje Paumen: “Yes! It is a really exciting time for us here at home because we are expecting our first baby in one or two weeks, but from now on it can come at any day, I think! Exciting times, but we are totally ready for it and I cannot wait to meet the little one.”

Congratulations to both of you and thank you once again for talking to us!
Maartje Paumen: “Thank you!”