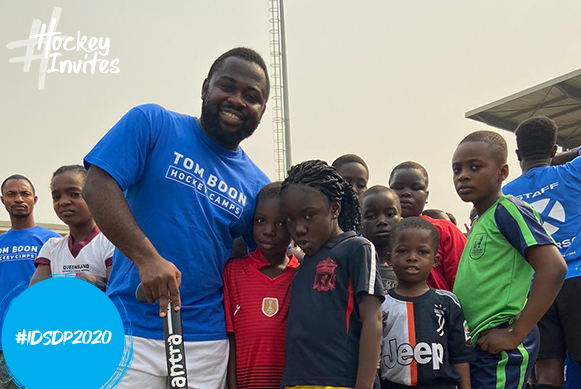 Tom joins the team to make hockey a hit in Ghana

As part of the celebrations surrounding the International Day of Peace and Development, we are highlighting projects and initiatives from around the world that are helping change society for the better.

Today’s story features a collaboration between European hockey powerhouse Belgium and the aspirational hockey nation of Ghana. Through strategic development and vision, hockey coaching and competitive opportunities are being opened up to young people in Ghana, meaning the youngsters gain the health benefits of regular sport. In addition, regular coaching and playing offers an opportunity for talented players to progress. It also offers aspiring local coaches the chance to make a career in coaching hockey.

The Royal Belgium Hockey Association (Hockey Belgium) and the Ghana Hockey Association are working with the Tom Boon Hockey Camp, the business enterprise of one of Belgium’s international hockey stars – goal scoring dynamo Tom Boon. Through the collaboraiton, it is hoped that hockey coaching and equipment will be delivered to numerous underprivileged communities in Africa.

Working with the Ghana Hockey Association, Hockey Belgium and the Tom Boon Hockey Camp ran their first coaching clinic and handed over more than 400 hockey sticks that had been collected over the course of the Belgium hockey team’s 2019 FIH Pro League campaign.

But this was not just a one-off charity activity. The three organisation partners are determined to make the project long-term and sustainable. To that end a coaching workshop was held with 25 Ghana-based coaches in attendance. These coaches, who are players, former players and teachers, having gone through the coach training, will now be delivering hockey coaching as part of a five-year development strategy called ‘New Heights’, with the ambition of raising Ghana’s hockey to the next level.

A coaching camp running along side the coaching course saw more than 170 boys and girls from 5-15 years of age take part in a range of coaching and competitive opportunities.

The project was initiated by Derick Lee, a professional hockey coach who originates from Ghana. He led the coaching course and was joined by three coaches from the Tom Boon Academy. The star striker himself was unable to join the session because of playing commitment but he will be visiting the project over the coming years.

Speaking on behalf of the Tom Boon Academy, managing director Matthieu De Mot, said: “Our goal is to help the Ghana Hockey Association carry out their development plan over the next five years. We will try to help and support based on identified needs.

“The first step will be mostly bringing equipment from Belgium. We have received a lot of sticks and balls from the Belgian Hockey Federation and from members of our clubs here in Brussels. We are convinced that we can do more. In the next steps, we would love to return to Accra for new workshops with local coaches, training with kids and organise a hockey camp mixing player from Ghana and Belgium.”

As a country, Ghana is relatively well-off when compared to many of its continental neighbours. However, as a hockey playing nation, it is a country that struggles with a lack of facilities, equipment and competitive opportunity. There is one artificial surface in Accra where the men’s and women’s national teams train, plus a number of clubs and teams. For players who live a long way from the city, hockey opportunities are far and few.

One of the aims of the Ghana Hockey Association, says De Mot, is to bring a clearer, national structure to coaching and playing. But first it is about equipping people to play the sport. “The biggest needs are hockey sticks and balls, and protective equipment, which will be distributed by the national hockey association in different regions.

“We consider our visit to Ghana as a first step of a longer term collaboration. We were very happy to share our knowledge and experience and to discover this beautiful country. The national hockey association is obviously very motivated and dynamic in developing our sport, which is something we deeply respect.”