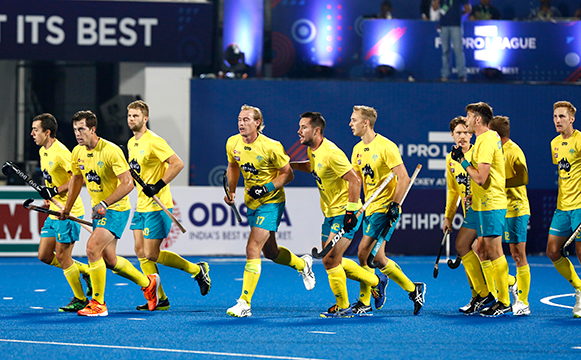 Tokyo 2020 Preview: Men’s Pool A – Australia the team to beat

Australia
The Kookaburras are regarded as the most consistently successful Australian sports teamover the past two decades and have been ranked amongst the top four nations in the world for more than 30 years. The Olympic champions of 2004 could only manage a sixth-place finish at Rio 2016, but under the guidance of head coach and former Kookaburras striker Colin Batch, the team will start Tokyo 2020 as one of the favourites for gold.

Coach quote – Colin Batch: “Being at our best when we need to be is what it’s all about. Our first aim is to qualify for the quarter-finals and we cannot underestimate that. We come up against a determined host country first up who will be nicely acclimatised and very eager to perform well in front of their home crowd, so each match generates a different set of circumstances. We’re not looking too far past that first match against Japan.”
One to watch: Eddie Ockenden. One of the undisputed greats of Australian hockey, Eddie Ockenden rarely puts a foot wrong no matter where on the field he is deployed. In March 2020 he became the most capped male player in Australian hockey history, surpassing Jamie Dwyer’s record of 365 appearances.

For more information on Australia, check out our special interview spotlight feature by clicking here.

India
It has been over 40 years since India men claimed the most recent of their incredible eight Olympic hockey gold medals. However, their superb form in recent times makes them serious contenders to claim a ninth title at the upcoming event in Tokyo. The team has claimed victories against nearly all the top teams in world hockey over the past couple of years, with Australian head coach Graham Reid getting the best out of a talented and exceptionally fit collection of athletes. India booked their ticket to Tokyo with two victories over Russia in the 2019 FIH Hockey Olympic Qualifiers, winning 4-2 and 7-1 in Bhubaneswar.

Coach quote – Graham Reid: “It has not been an easy process to make the final selection of 16 players as there is a lot of quality and ambition in this group of players. The performance levels of all the athletes are at an optimum level and more importantly they work well together. They know what it means to represent the country at the Olympics. We are now focussed on training with the same intensity and our goal is to put forward our best performance as a collective unit in Tokyo.”
One to watch: Manpreet Singh. India’s captain is a dynamic midfielder who leads by example. Named FIH Player of the Year in 2019, becoming the first player from India to win the award.

For more information on India, check out our special interview spotlight feature by clicking here.

Argentina
For many years, Argentina’s men were hidden in the long shadow cast by the remarkable achievements of their female counterparts. A bronze medal at the Rabobank Hockey World Cup 2014 in The Hague (NED) changed everything, with Los Leones (The Lions) going on to claim Olympic gold – something that even Las Leonas (The Lionesses) have not achieved – at Rio 2016. Can they defend their title in Tokyo?

Captain’s comment – Pedro Ibarra: “We know that we are the last champions, but this tournament is something different. It [is now] five years later, and every team has changed players, changed coaches, changed tactics, changed everything. So, we have to be quiet and go step-by-step, as we did in Rio.”
One to watch: Lucas Vila. Long considered one of the most naturally gifted attackers in world hockey, Vila has a reputation for scoring spectacular goals and always provides assists for his team-mates. Played an instrumental role in their Olympic success in 2016.

For more information on Argentina, check out our special interview spotlight feature by clicking here.

Coach quote – Darren Smith: “It’s a pretty experienced group but it’s also the first pinnacle event for players like Sam Lane who have previously missed out through injury or Jacob Smith and Nick Ross who have been rewarded for their perseverance. They’ve shown they’re really determined to be there.”
One to watch: Stephen Jenness. An attacking midfielder with a keen eye for goal, Jenness has been a central figure for the New Zealand team for nearly a decade, earning well over 200 international caps since making his debut in 2011.

For more information on New Zealand, check out our special interview spotlight feature by clicking here.

Spain
Spain’s men have regularly produced sides that are capable of fighting for the biggest honours in the game, a fact proven by five silver medals at Olympic or World Cup level, not to mention two European championships and a Champions Trophy title. Head coach and former France international Frédéric Soyez – who will step away after Tokyo, being replaced by current Netherlands men’s head coach Max Caldas – has instilled a wonderful work ethic into his team without sacrificing any of the flair that has been the signature of so many Spanish sides in the past. Spain earned a berth at Tokyo with a hard-fought triumph over France in the 2019 FIH Hockey Olympic Qualifiers, coming back from three goals down to draw 3-3 in the first match before edging a 3-2 victory in Match 2 in Valencia.

Player perspective – Marc Salles: “Regarding the pool, it’s very different. You have Argentina, but also Australia and New Zealand, who play a little bit [in] the same [way], hockey that is very physical. They go for it all game; they don’t have any down time. With Japan, we don’t know a lot about them. We know that they won the Asian Games a few years ago, so they are going to be very good. We know India. It is always difficult to play them as they are skilful, fast and unpredictable. We have a very open pool, and I am looking forward to playing in it.”
One to watch: Xavi Lleonart. A pacey, skilful attacker with an eye for goal, Lleonart has an uncanny ability of unlocking opposition defences.

For more information on Spain, check out our special interview spotlight feature by clicking here.

Japan
As the host nation, Japan’s men already had a ticket to Tokyo 2020 before they stepped onto the field at the 2018 Asian Games in Jakarta, Indonesia. Incredibly, at that event they earned an outright berth, claiming a stunning gold medal ahead of four higher-ranked teams in India, Malaysia, Pakistan and Korea. It was an astonishing achievement for the team coached by Dutchman Siegfried Aikman, who will be looking to weave his magic with the team as they target a podium place on home soil.
Player perspective – Manabu Yamashita: “I am very excited and cannot wait for the Olympic Games to be played in my country. I feel I am very lucky. I’m very proud about representing my country, especially when singing my national anthem. It will be a very special occasion.”
One to watch: Manabu Yamashita. A high-quality defender who has represented Japan for the past ten years, ‘Yama’ will be determined to enjoy every minute of the home Olympics experience.

For more information on Japan, check out our special interview spotlight feature by clicking here.

Our pool previews will continue on Wednesday when we look at Women’s Pool B, where Australia, Argentina, New Zealand, Spain, China and Japan will battle it out for the four quarter-final berths.