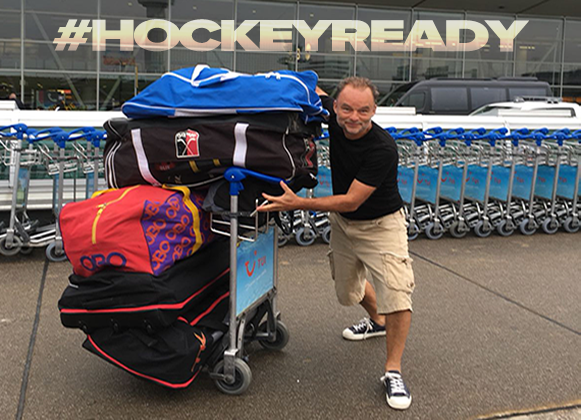 Thomas Tichelman is well known in coaching circles. As a high performance coach, he has worked with the world-beating Netherlands national teams, including his role as part of the coaching team that led the Netherlands men to silver at the 2012 London Olympics.

Since then, Thomas has been a key player for both the FIH and the European Hockey Federation (EHF) in developing coaches through collaborative high performance coaching programmes. He is currently a FIH Academy Educator and global developer.

But the glamour of Olympic medals and top class international competition seems a long way away as Thomas contemplates his current challenge – to reignite a passion for hockey in the very seat of the Olympic movement, Greece.

Thomas explains further: “A few months ago I ran a course for a group of physical education teachers in Greece. The course took place on an old basketball course and I took all the equipment with me but the staff were so enthusiastic. I felt that something quite beautiful was being created and I said to myself, ‘I can’t just go away now and shut the door on this’, I knew I had to do more.”

I returned to the EHF and the FIH and said: “We cannot leave Greece behind. Yes, there are few facilities and very little equipment but we can help change and make a difference.”

The result is a grand plan to develop hockey from the smallest of beginnings. Thomas and a team of up to 10 other coaches will be starting a programme in April that, they hope, will eventually reach 3-5,000 potential hockey players.

In preparing the ground work for the programme, Thomas met with a group of 16 PE teachers and within three days, the group went from no knowledge to playing a full game, with substitutes.

“We cannot leave Greece behind. Yes, there are few facilities and very little equipment but we can help change and make a difference.”

In a collaborative move that includes FIH, EHF, Hockey Australia and the Greek government, from April onwards Thomas and his team will be running a series of eight week coaching courses at schools around the country. Each course will cater for up to 20 teachers and at the end of each course the participating schools will be given a starter kit comprising sticks, balls and eight-week’s worth of lesson plans. As a fore-runner to this, The Hockey Foundation, which is supporting the project as part of its #HockeyREADY campaign, collected five bags of donated sticks and equipment, which Thomas will deliver to schools in Greece.

The scheme initially will last for three years and, at the end of that time, Thomas hopes that there will be a series of informal leagues so that the children can continue to play the sport. His other ambition is for hockey to be a key part of the school sports curriculum.

“I want to open the students’ eyes to the opportunity to play hockey,” says the coach. “And I would like the PE teachers to be able to drive the programmes themselves, at the end of the day it has to be sustainable. It is also important that they deliver the course in their own language.”

Greece is a country that is going through difficult financial times and resources for sports are very limited but with collaborative work of this kind, hockey is once again proving that the global hockey community can come together for the benefit of a community.

As a fore-runner to this, The Hockey Foundation, which is supporting the project as part of its #HockeyREADY campaign, collected five bags of donated sticks and equipment, which Thomas will deliver to schools in Greece.

Many of the donated sticks and goalkeeper kits were provided courtesy of the Hockey Dreams Foundation, one of a number of organisations who are pulling together with Thomas to help develop and grow a vibrant hockey scene in Greece.