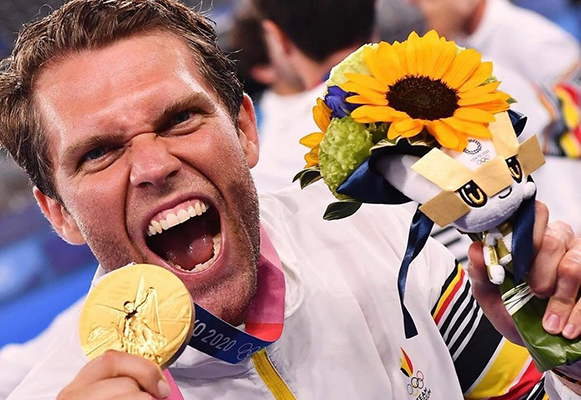 This is 'just the start' for Vanasch and his Lions

Vincent Vanasch is the proud owner of an Olympic gold medal after the 33-year-old and his team defeated Australia in a pulsating final at the Oi Hockey Stadium in Tokyo.

“It is really something else. We won silver in Rio [Olympic Games 2016]. I said then that I ‘lost’ the gold medal in Rio, so this one [gold medal] is incredible.”

Talking about the final to the men’s competition at the Olympic Games Tokyo 2020, which Belgium won on shoot-out after it finished 1-1 in full-time, Vanasch – who is a three-time winner of the FIH Goalkeeper of the Year – said: “It was a final and crazy things can always happen in a final. I think Australia v Belgium was the match that people wanted to see. It was a bit like a Federer and Nadal tennis game.

“We had some chances and we scored and then they scored. Then we went to shoot-out and it was a case of winning the Olympics in five minutes.”

The shoot-out was equally dramatic and tense. Belgium thought they had won when Vanasch saved a shot from Australia’s Jake Whetton. The Red Lions erupted in a cheer of jubilation only to see Australia’s referral cause the shoot out attempt to be re-taken. Vanasch saved again and this time the Belgium side really could celebrate.

“I knew I had touched his [Whetton’s] leg with my stick so I knew it would be a re-take,” says Vanasch with a smile. “I took a cold drink and then I was ready for it.”

Asked what makes the Belgium squad so good – they are also reigning World Cup Champions – Vanasch said: “We have Alex Hendrickx who is a great drag flicker, but the strongest thing we have is the collective that is our group. We have had ups and downs and many of the team have played 10 years together.

“In the past we have lost 10-0 to Australia, to Netherlands and Germany. But we have grown together. We trust each other, that is the mark of the Red Lions. Everyone can express themselves in our team and we realise how important it is to be the best version of ourselves.”

The challenge for Vanasch and his teammates is to continue to win. “Once you have tasted that gold medal, you want more. We give so much to hockey and we make so many sacrifices, as do our family, we just want to make them and Belgium proud.

“We came to Tokyo with one mission. At the EuroHockey Championships [where Belgium finished third], we said, ‘okay, in Tokyo we are going to perform. And that is what we did.”

Head Coach Shane McLeod was emotional at the end of the final and his goalkeeper paid tribute to the work of the New Zealander and his staff: “He [McLeod] says that he jumped on a train as it was on its way. He gave confidence to the group and we developed trust in ourselves. Our mental strength is much better. He is part of our team and he is part of our country.”