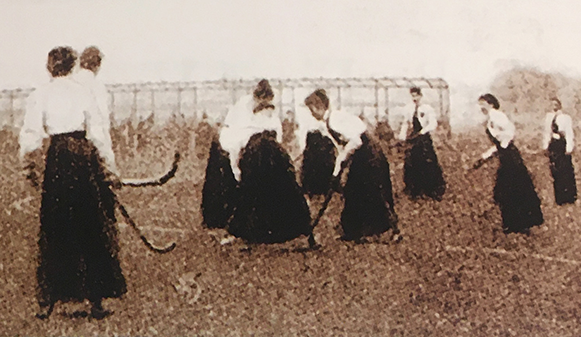 Courtesy of the Hockey Museum

2 March 2021 is the 125th anniversary of the first ever women’s international hockey match in 1896, between Ireland and England. Ireland beat England 2-0.

The game took place on the Alexandra College ground in Milltown, Dublin, at 3.30pm, in front of a crowd of about 2,000 people. M Obre and D Johnson scored for the hosts.

To put things into context, this match took place less than fifteen years after the formation of the first hockey club at Teddington and only one year after the first men’s international match. Perhaps more importantly, social opinion at the time considered women’s hockey, indeed women’s sport, to be unladylike! Contrast that with today when some one hundred nations are playing women’s hockey internationally.

This was certainly not an impromptu event as the invitation to England had been issued the previous year. Indeed, it was the Irish who formed the first women’s national association, the Irish Ladies Hockey Union in 1894. Ireland has much to be proud of internationally; they won both of the first ever international hockey matches, men’s and women’s.

The history books show that this game was almost the second in history because a match did take place in Brighton on the 10 April 1895, one year earlier. Although it was publicised as an ‘international’ it was soon downgraded to ‘another match of interest’. This was because the Irish team, although very competent, were in fact the Alexandra College team from Dublin, not a national team. Additionally, England had yet to form their national association so the England team had no official status. As such, the match at Milltown, Dublin on the 2 March 1896 becomes the first ‘true’ international women’s match.

The reports of this notable 1896 encounter follow, albeit by male reporters!

The Irish Independent:
“There was little to choose between the teams, and though the combination of the Irish ladies was better than that of their opponents, and they had somewhat the better of the opening period, the English ladies pressed quite as much in the second half, and with better shooting they might have equalised.”

The Irish Times:
“When the teams took up their positions they made a pretty scene, the English players wearing red skirts and white bodices and caps, while their opponents were arrayed in green blouses and dresses of a similar but deeper hue, and as the colours mingled and co-mingled during the course of the match, the spectacle was quite animating, not to say charming.”

The Daily Express:
“After the bully-off, lreland got down to the English line, and there was close work for a few minutes until the visitors brought the ball to centre along their left wing. Ireland returned to the pressure and Miss Johnson [disproved; correction: Obre] got a run to the circle where, after some scrummaging, she shot the first goal for Ireland a few minutes from the start.”

Ireland went on to score a second goal before half time.

“The visitors set about reducing the opponents' advantage in determined style and, with the backs feeding the front division well, the latter made matters pretty warm for the Irish defence. Miss Martin in goal was equal to all the calls made upon her resources however and, after the Irish had conceded a corner of which nothing came, a penalty free gave them a much-needed relief.

“The English ladies attacked hotly and Miss Martin only Just managed to stop a fast shot sent … in the nick of time. A couple of corners gave England no material advantage and, after some give and take play, the Irish forwards, whose placing of the ball at this period was very good, gradually worked their way into the visitors' circle. Miss Bell had an ineffectual shot at goal, following which Miss Robson raised the siege and the remainder of the play took place at midfield. Ireland thus won a meritorious victory, albeit they were hardly two scores the better side.”

The sides lined up as follows: 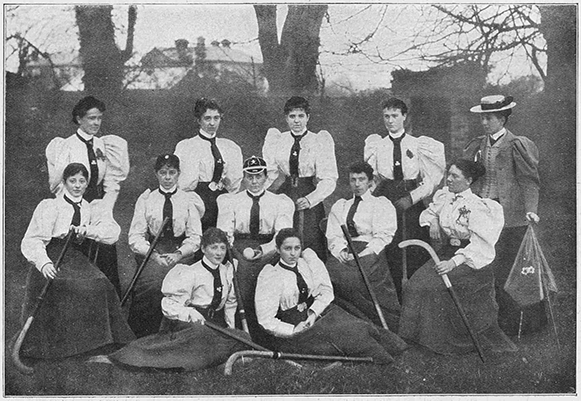 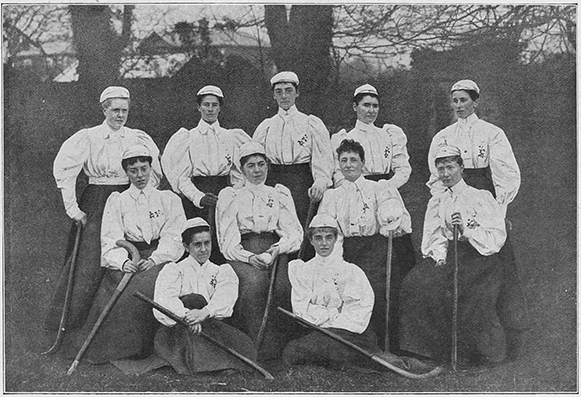 Visit The Hockey Museum website to know more about the first and only museum of Hockey in the world.