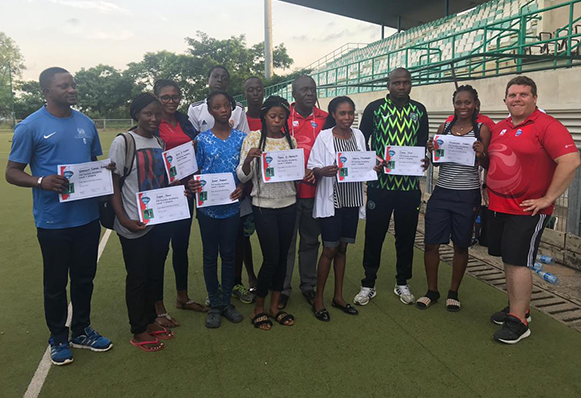 Over the past few years Tap West Africa has been an on-going success story for hockey development in West Africa. Through the Targeted Assistance Programme (TAP), coaches, umpires and officials have been trained in the skills necessary to run hockey successfully in their country. Some great collaboration has been seen between the FIH, the African Hockey Federation, UK Sport, England Hockey and the various local national associations involved.

The latest TAP West Africa venture took place in Abuja, Nigeria and comprised a series of courses aimed at umpires, coaches and hockey developers. With more than 60 candidates signed up for six courses, the future development of hockey in the west African nation looks promising. The course covered four areas essential to running a successful hockey programme: coaching, umpiring, officiating and development.

The Hockey Developer Course was run by Brett Holland, an FIH Academy Educator who currently coaches Loughborough University women’s team in the UK and Ginny Ross, Vice President of the African Hockey Federation and an experienced FIH Academy Educator. This course aims to teach people involved in hockey how to successfully develop hockey locally, from running events and tournaments, to develop strategic plans for grass roots, school and club hockey.

The Level One and Level Two umpiring courses was headed by FIH Academy Educators Ediga Agbo, Umpire Manager from the African Hockey Federation and David Elworthy, who is England Hockey’s Officiating Relationship Manager.

A Level One Technical Officials course was run by Frank Olti-Mensah, who has been busy in the past year as FIH Pro league Technical Officer, as well as a FIH Academy Educator.

All the courses comprised classroom and practical learning, with demonstrations, lectures and peer-group sessions. There was then a coming together of the various groups as the Level Two coaches ran some training sessions with the Level One candidates as their subjects. Feedback on the session were given by the trainee hockey developers. Candidates from the umpiring course officiated in the games that were run as part of the session.

One of the course candidates on the umpiring course, Abubakar Sadieeq took to social media to say: ‘Thank you FIH, England Hockey, Nigeria Hockey, AfHF and our educator team, I congratulate all my colleagues.”

And Marcus Izang added: “Thank you for impacting us with more hockey knowledge."

Speaking about the success of the courses, Ginny Ross added: "The number of participants,their enthusiasm to learn more about hockey and the fun they had was amazing. It made the entire course race by. “Now we need to make sure we keep extending the programme and its benefits to other areas within the region so that hockey can continue to grow across this part of Africa."