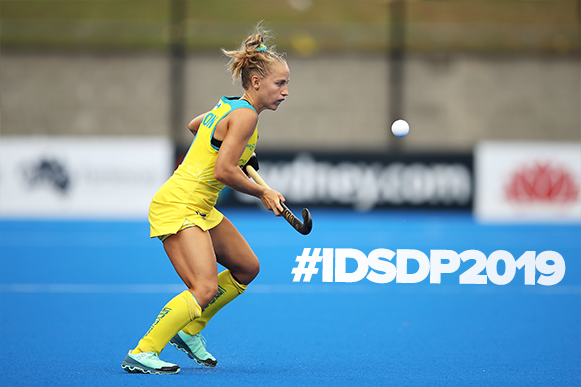 Talking down the demons of depression

Injury is a constant threat to elite athletes. And while the physical recuperation for a long-term injury is challenging, an often over-looked part of injury is the mental impact of being sidelined for a long period of time.

It is something Hockeyroos Georgia Wilson has spoken out about and, in dealing with her own demons, she is now turning her own experiences to good effect as she encourages others who find themselves in dark place to call out for help and support.

“Before my Anterior Cruciate Ligament (ACL ) injury, the only other major injury had been a hamstring tear that kept me out of the game for three months,” she says. “I wish someone had told me when I first did my ACL just how awful it was going to be.”

A 14-month lay-off meant Georgia missed the 2018 Commonwealth Games, where Australia won silver, and the 2018 Vitality Hockey World Cup, where they finished in fourth place. Georgia, in the meantime, was undergoing a gruelling rehabilitation programme and sometimes struggling to contain the demons of depression.

“I needed someone to tell me, ‘you are going to struggle and suffer and be in a bad place for a long time, but that is okay.’ Because, for me, when I was experiencing those depressive episodes and the anxiety about my future, I wasn’t sure if that was normal. If someone had told me that up front, I would have been better able to cope with my emotions.”

This wasn’t the first occasion that Georgia had encountered mental health issues up close. Her sister, Mackenzie, has suffered a long history of mental health issues that stemmed back to an eating disorder. There was a suicide attempt and, for a long period, Georgia and her mum were on tenterhooks as Mackenzie needed 24-hour surveillance.

“I needed someone to tell me, you are going to struggle and suffer and be in a bad place for a long time, but that is okay."

It was at this time the Wilson family discovered the importance of seeking support and vocalising their pain and suffering.

“A lot of people congratulated and commended our family for how open we were about Mackenzie. So many families keep suicide attempts very secretive,” says Georgia. “But, by being open about it, we got support from everywhere and that helped relax us. We had an army of different spies keeping an eye on her, which lifted the load from our family.

“The greatest thing about talking about it was that we could be genuine. For example, if we went to a friend’s house for dinner people understood the situation and were empathetic to it.”

That support was echoed within the Hockeyroos squad.

“I told my teammates and coaching staff about the situation and sometimes Mackenzie came with me to training. Her situation impacted me but my team-mates could understand if I was a bit snappy or irritated. They would know not to make inappropriate jokes and it gave them a context as to why I was behaving the way I was.”

With time on her hands as she underwent rehab, Georgia started to do some work for the charity Zero to Hero. It deals with suicide and Georgia found that, as someone with first-hand experience of many of the issues facing people, she was instantly relatable to a wide spectrum of people. She was soon talking, sharing her own story and offering advice.

Much of her awareness raising and support is carried out through social media. “What we often see on social media is a ‘highlight reel’. I promised that I would speak up if I was feeling great or if I was feeling awful. I went on platforms where I could relate my story. I did a podcast for the West Australian about some of those struggles. I also did a workshop with children from deprived background to talk about my experiences. I actively sought ways in which I could share what I was going through.”

That work has now led Georgia to taking up a role with national charity Lifeline, which offers crisis support and suicide prevention. She is attending workshops to develop her own skills in mentoring and counselling and her involvement is backed by Hockey Australia and the coaching staff. 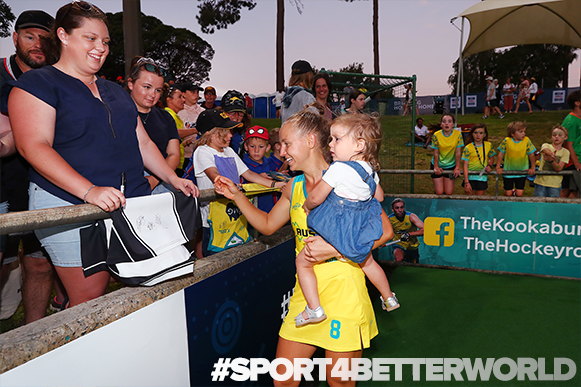 “Our coaches have always said ‘we want good people and then we can develop good hockey players’,” says Georgia. “Their message is: ‘You can be the best hockey player but if you aren’t able to cope with the demands of elite sport or growing up we will not produce top-performing athletes.

“There is a huge emphasis among the squad on being active custodians in the community.”

Georgia is already seeing the results of her work. Recently she received a message from someone who had long given up on returning to active participation after suffering an injury. “I’ve just signed up for my former hockey club, you have given me the motivation to do my rehabilitation properly and get back into the sport I was missing so badly.”

“For me,” says Georgia, “I particularly want to speak to young athletes, especially young girls, and say I have struggled with my body image and performance anxiety. I need to put myself in a vulnerable place in order to do that. I have got to a place where I am no longer embarrassed about it. I am willing to be vulnerable if it means someone else will go and get help.”