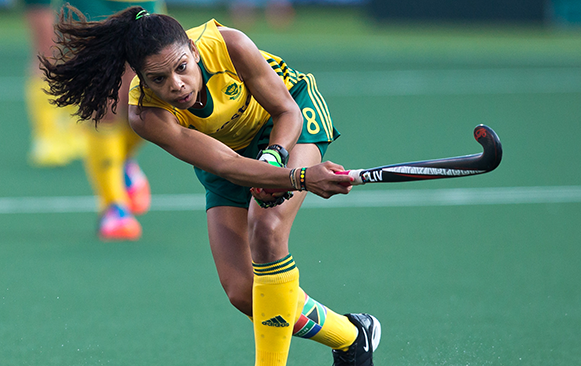 “Stay true to who you are”, says South Africa legend Marsha Cox

In part two of our in-depth conversation with a true icon of South African hockey, former women’s team captain Marsha Cox [née Marescia] reflects on her wonderful playing career as well as discussing the influence of her hockey-playing mum and settling down in the Netherlands.

Marsha – who lives in Holland with hockey coach husband Alexander and their daughter, with baby number two set to arrive in September – also offers some words of wisdom to young hockey players all over the world, stressing the importance of staying true to yourself in order to overcome the various challenges on your journey towards fulfilling your potential.

To see part one of our interview with Marsha Cox, please click here.

Between 2001 and 2014, you represented your country 347 times and attended the Athens 2004, Beijing 2008 and London 2012 Olympic Games, being captain at the latter two. When you first started playing, could you have possibly imagined achieving everything that you did?
Marsha Cox: “I started my career really young, not just internationally but also playing hockey and having this love and passion for the game, pretty much growing up on the side of the hockey field. Honestly, when I first started my career I would never have thought that after 14 years I would have achieved all things that I did, all the milestones and to be part of amazing international events, Olympic Games – those are things that I would never have dreamed of, right at the beginning, as a little girl. As I hit the international scene, I just wanted more and more. It was something that I always strived for, but I never ever thought I’d look back at those years and be absolutely surprised and honoured and pretty much amazed that I lasted 14 years and participated in so many different events.”

When you were growing up in Durban, how did you first get into playing hockey? Who or what first influenced you to pick up a stick?
Marsha Cox: “Growing up I Durban, I pretty much grew up on the side of a hockey field. My mum [Marian Marescia] was a very talented hockey player, and during apartheid [institutionalised racial segregation that existed in South Africabetween 1948 and the early 1990s] she played for the SACOS [South African Council on Sport, a non-racial sports federation that became the sports wing of the anti-apartheid movement]South African Hockey Team. So, I was exposed to the game literally from birth. I think the process of getting a stick in my hand was something that happened naturally. I was pretty much at hockey every single week. Not only did she play but also, being a teacher, she naturally was a hockey coach as well, so most afternoons after school I would be training with the other kids, who were often older than I was. At the age of six I probably played my first official school game. It was quite funny because I was so accustomed to playing, yet in the first official game I ran away from the ball because I was so nervous and intimidated by the older kids! I think it was just a natural process, and I’ve never looked back since. My love and passion for the game got stronger and stronger as I got older, which I think has come to something really special. Something that I could share a passion with my mum, and later on, share the passion for the game with my husband.”

You mention your husband, who is the renowned Dutch hockey coach Alexander Cox. You played club hockey in the Netherlands for many years and have built your life in the country. Are you still actively involved in the sport in the Netherlands, either as a player or coach?
Marsha Cox: “I have played many years of Hoofdklasse [top league] hockey here in the Netherlands. I played one year for Nijmegen, two years for HC Rotterdam, and three for SV Kampong, so that is quite substantial! Having met my husband here made a huge difference to my experience as a hockey player. Currently I am pregnant, right now, so hockey playing has been put on hold. However, I was playing for a hockey team that plays in the over-30s league – yeah, I’m getting old! It’s really competitive, with a lot of past international players and it is really fun to be a part of. Everyone is extremely competitive but are completely understanding to work and family commitments. As soon as baby number two is a little bit older, I’ll be re-joining the team.

“Hockey coaching is not something that I have ever rated myself at. However, I have been involved in managing teams here in the Netherlands, as well as mentoring players, so athlete development and athlete representation is something that I’m extremely passionate about. That is where I feel my strengths lie. I feel coaching is extremely important, but there are other roles around a coach that are equally important to a team, and those types of roles – like management, assisting players in their own self-development – is something I’m extremely passionate about. Growing and furthering my own knowledge and experience, I want to see myself positioned in the future with my contribution back to the game.”

Finally, if you had one piece of advice you would give to aspiring young hockey players around the world, what would it be?
Marsha Cox: “It is a tough one, but I think if there is anything that I have learned along the journey of being an international player is that there will be tough times, and there will be challenges thrown at you. There will be times where you actually question the path that you have chosen, but if there is one thing I can leave behind, it is: know your ‘why’. Know exactly why you have made a commitment to this game, exactly why you are passionate about it and love it so much; and stay true to who you are. It doesn’t matter what challenges come your way, you’ll remember exactly why you love it and exactly why chose it. You’ll always keep going back, and you’ll always love those challenges and be victorious at the end. Good luck and enjoy!”