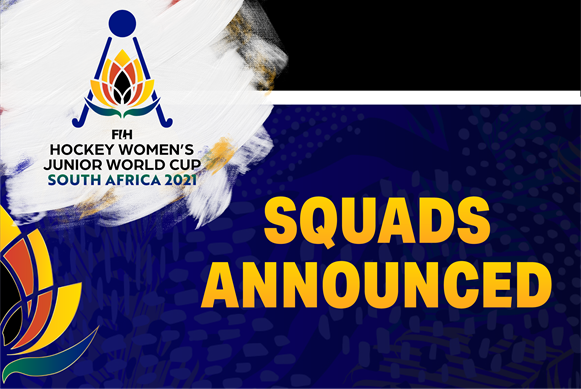 Lausanne, Switzerland: The International Hockey Federation (FIH) is delighted to confirm the squad lists for the upcoming FIH Hockey Women’s Junior World Cup South Africa 2021, the showpiece event where hockey’s rising stars will take to the field in the global showpiece in Potchefstroom.

The competition, which takes place from 5-16 December, is the first FIH World Cup event ever to take place on African soil.

Although the Junior World Cup has a deserved reputation as being a competition in which the stars of the future showcase themselves for the first time, there are numerous players who have already made a considerable impression on the sport. Argentina are blessed by the presence of the Valentina Raposo, the brilliant 17-year-old defender who won silver with Las Leonas at the Olympic Games Tokyo 2020. Issy Petter and Fiona Crackles are also Olympic medallists from Tokyo 2020, being part of the bronze medal-winning Great Britain team and now being named in the England squad for Potchefstroom.

India’s women also have Olympians amongst their ranks, with Lalremsiami, Sharmila Devi and Salima Tete all included in the Junior World Cup squad after their remarkable fourth place finish in Tokyo. Jette Fleschütz (Germany) and Laura Barrios (Spain) are also Olympians from Tokyo, while Ambre Ballenghien and Charlotte Englebert are two of numerous players named in the Belgium squad to have played in the FIH Hockey Pro League.

You can find all the squads for the FIH Hockey Women’s Junior World Cup South Africa 2021 by clicking here. To download a PDF version of the squad lists, click here.

In territories where broadcast rights agreements are not in place, fans can watch every match at the FIH Hockey Women’s Junior World Cup South Africa 2021 live and free of charge via the Watch.Hockey app. For Broadcast information can be found by clicking here.

Looking ahead to the event, FIH President Dr Narinder Dhruv Batra said: “The Junior World Cup is a proven launch-pad for hockey’s brightest young talents, and we are certain that the 2021 competition in Potchefstroom will unveil many exceptional individuals who will dazzle us for years to come.

“For many of the athletes, this will be the first time they have represented their nation on such a big stage. The honour of representing their respective countries is something that will live with each player for the rest of their lives, regardless of what they go on to achieve in life and sport.

“I would like to thank the South African Hockey Association and North-West University and all their partners for their relentless energy in planning for this event. Our thanks must also go to the sponsors and all the volunteers who are crucial to making this event a success.

“Finally, a personal message to all our athletes and officials. You are the bright future of the sport and without you, we have nothing. I hope you enjoy every moment of this competition and your stay in Potchefstroom. I wish you every success in this competition.”

The opening match of the FIH Hockey Women’s Junior World Cup South Africa 2021 sees Ireland taking on Zimbabwe in a Pool A encounter on 5 December. The competition final will be played on Thursday 16 December. To see the complete match schedule, click here.

The official website for the event can be found here: https://www.juniorworldcup.hockey/women/.