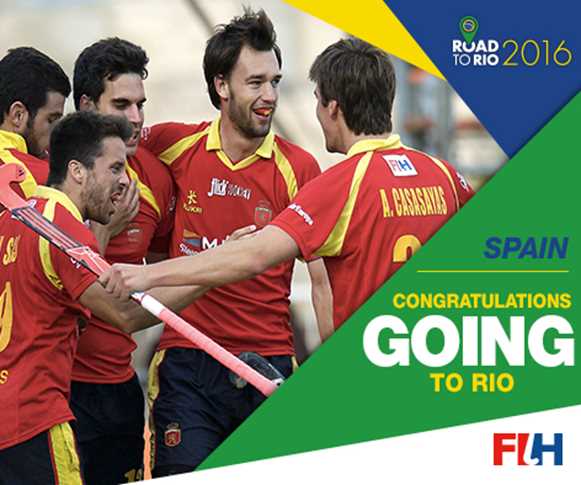 The International Hockey Federation (FIH) has confirmed today that Spain men have qualified for the hockey event at the Rio 2016 Olympic Games.

Spain qualified after Ireland lost to the Netherlands in the semi-finals of the Unibet EuroHockey Championships in London, which ensured that the only teams who can now win the event have already qualified for Rio through the Hockey World League Semi-Finals – the Netherlands, Germany and England (as Great Britain).

The winner of the EuroHockey Championships will qualify for the 2016 Olympics as European continental champions, opening up a further qualification spot which Spain secure as the team who ranked highest at the Hockey World League Semi-Finals not already qualified.

Spain finished fifth at the Hockey World League Semi-Final in Buenos Aires while Ireland finished fifth in Antwerp, however Spain qualify ahead of Ireland as they rank above them in the FIH world rankings.

Brazil men also joined the line-up when their place in the semi-final at the Pan Am Games satisfied the host nation participation criteria established by IOC and FIH.

The remaining two Olympic places (men) will not be finalised until after the Continental Championships, the Oceania Cup and the Africa Cup of Nations, which finish in November this year.

For more information on the qualifying process and to track who has qualified, click here for the men and here for the women.