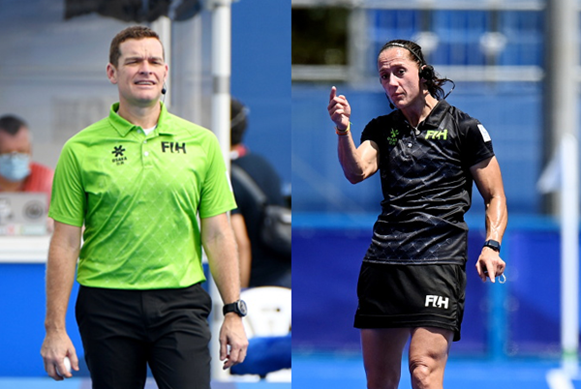 As has been widely reported, numerous players decided to hang up their hockey sticks following the completion of the Olympic Games Tokyo 2020 in August. However, it is not only athletes who step away at the end of an Olympic cycle, with no fewer than five of the world’s finest international umpires also finishing on a high at the world’s greatest sporting spectacle.

Michelle Joubert – who took charge of the women’s bronze medal match between India and Great Britain alongside Michi Meister – closed out with 157 matches, three Olympic Games and three World Cups under her belt.

Speaking in a video interview with FIH, Michelle Joubert and Peter Wright look back on their time as international umpires, their joy at being part of the ‘incredible’ hockey family as well as their considerations about becoming mentors to the next generation of international umpires by possibly pursuing careers as umpires managers.

Reflecting on taking charge of the bronze medal contest between India and Great Britain in her final match, Michelle Joubert said: “I couldn’t have asked for a better game. I didn’t think about it too much in the beginning until I read [India captain] Rani’s post on Facebook, where she talked about her childhood and how she had to fight just to participate to become a hockey player. Being South African, we come from a culture-rich country, so I understand the struggles because we deal with it daily in my work with kids. It is so inspiring, and for me to be part of that game, seeing how much it meant to them and following the story of team India after the tournament, it’s heart-warming. Although they didn’t win the bronze medal, to see actually how much it meant to them, and how it brought their country together … to be part of that is what you will remember for the rest of your life.”

“When you think about all of the places we have been to, it brings back a lot of memories and a lot of emotions that go with that”, said Peter Wright. “The hockey family is something incredible. They are friends for life, friends that you can pick up the phone when you are in trouble – you chat to them once every few years and it is like you have never been apart. That is probably the biggest thing that I am going to miss, the camaraderie and the rubbish we get up to off the field. We spend more time off the field than on it, so you get to know the guys and girls really well. The joint tournaments (mixed gender appointments) have been a wonderful addition for the FIH, and I really hope that they do carry on mixing the tournaments as it adds a whole new dimension and new flavour. Many, many friends, both male and female, throughout the years have been made, and I hope that they last for many years to come.”

You can see a teaser of the video interview with Michelle and Peter below, with the full version available on the watch.hockey app.

As always, the FIH would like to offer our eternal gratitude for the devotion and professionalism shown by all our international technical officials, being wonderful examples for the entire hockey community.