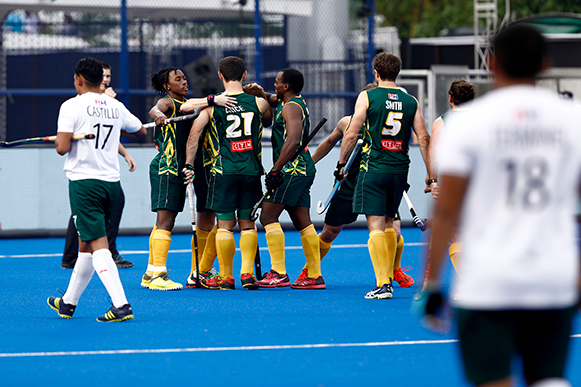 UPDATE: ALL MATCHES LIVE ON FIH.LIVE FROM 15 AUGUST ON

The African Road to Tokyo 2020 takes place in the South African university city of Stellenbosch from 12-18 August. The event, which comprises eight men’s teams and seven women’s teams, doubles up as the continental Olympic qualifier for Africa with the winning teams qualifying for a ticket to the Tokyo Olympic Games 2020.

In the men’s competition, eight teams will be competing with South Africa and Egypt the two teams widely expected to be contesting the title.

South Africa (World Ranking:14) have recently completed a successful FIH Series Finals campaign in which they took second place in Bhubaneswar and with it the chance to compete in the FIH Olympic qualifiers in October and November.

At that event, South Africa got off to a slow start as they lost to the lower ranked USA team but they warmed up through the tournament and made their way to a final against the host nation India. Although they lost that match 5-1, South Africa Head Coach Garreth Ewing was happy that his team had found their rhythm and were competitive with India, a much higher ranked team at number five in the world.

For South Africa – both the men’s and women’s teams – the African Championships are just one part of the bigger picture. The South Africa Olympic Association (known as SASOC) has stipulated that the teams need to qualify via two routes – by winning the African Championships and by winning through to the FIH Olympic Qualifiers in October and November. At time of writing, this was the stance from SASOC, so the men’s endeavours in India have put them in a strong position.

Egypt (WR:20) were also in FIH Series Finals action and impressed with their performances, including a victory over higher ranked Ireland (WR:9) and a draw with Korea. They finished fifth but, with players such as Amr Ibrahim in the team, they are a talented and determined opponent.

The third highest ranked side in Stellenbosch is the west African nation of Ghana (WR:36). The Ghana team plays a free-flowing, attacking stye of hockey which could cause the more disciplined teams a problem as they try to contain them. Consistency and an ability to keep the tempo high towards the end of matches will be Ghana’s biggest challenge.

It is a similar story with Kenya (WR:48) and Nigeria (WR:57). None of these teams have played on the international scene much in the past few months so the opening games will see the teams working hard to adjust to international action. Once they are in the swing of things, Kenya in particular will be a threat, with their strong, speedy play.

Two teams who have had the benefit of international action recently are Zimbabwe (WR:61)and Namibia (WR:68). At last year’s FIH Series Open events, Zimbabwe and Namibia couldn’t be separated. While neither team is likely to challenge for the top spot, there is little doubt that they will provide entertaining hockey action.

The final team in the line-up is unranked Uganda. The east African team will be looking to gain international experience and will view this event as a huge step forward in terms of its hockey development. 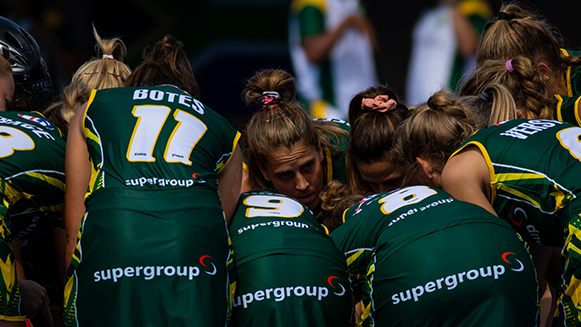 The women’s competition is likely to be dominated by reigning champions South Africa (WR:16), with Ghana (WR:32), Namibia (WR:40) and Kenya (WR:45) likely to be competing for the second and third spot. That said, Namibia, under the guidance of head coach Erwin Handura, are making huge steps forwards. The team competed in the Indoor World Cup in Berlin in 2018 and have recently returned from the FIH Series Finals in Valencia, where players such as goalkeeper Petro Stoffberg, midfield maestro Magreth Mengo and Jerrico Bartlett were able to show their class.

At the same FIH Series Finals, South Africa suffered disappointment as they finished in fourth place, thus failing to secure a place at the FIH Olympic qualifiers. Their performances in Spain however, was enough to showcase their undoubted class. With the likes of Dirkie Chamberlain, Quanita Bobbs and Lisa-Marie Deetlefs in the side, the event in Stellenbosch should see South Africa dominate proceedings. The team is still hopeful that SASOC will reconsider their stance on qualification.

While South Africa and Namibia play a very structured style of hockey - influenced by the indoor hockey in which both teams excel – Ghana and Kenya both play very different styles of hockey. Fast running with the ball and quick, sharp passes symbolise these two teams and could make them very tricky opponents.

Nigeria (WR:47) is a side that is playing catch-up with its neighbouring teams but recent development activities indicate that the Nigerian team are serious in their intent to move back up the rankings and to compete once more on the world stage – Nigeria last played in a major international hockey competition when they competed in the 1978 World Cup.

The final two teams in the competition, Zimbabwe and Uganda have very different hockey-playing traditions. Zimbabwe are Olympic gold medallists in hockey – winning in Moscow 1980 – but since then, the nation has slid down the world rankings and is now seeking to re-establish itself on the world stage. Uganda is a nation that is picking the sport up anew – a relatively strong club structure is the basis for a team that might produce some surprises at this event.

The African Road to Tokyo 2020 has all the ingredients to make a great event. The differences in style, the unknown quantities of many of the teams and the fact that, at a tournament, the unexpected can always happen. And after the six days of action, two teams will be continuing their Olympic dreams.