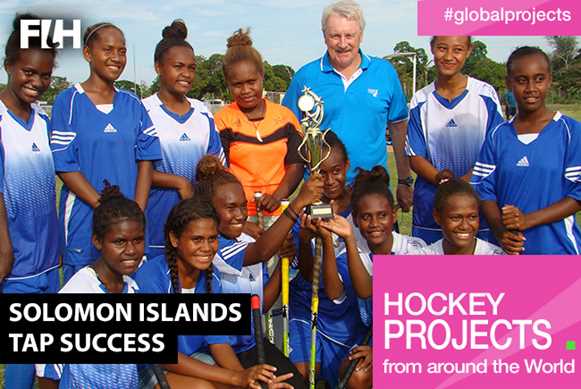 14 months ago there was no hockey federation to promote and deliver any hockey competitions or programmes in the Solomon Islands. However, since then they have become a source of inspiration to other Oceania nations thanks to a joined up approach involving various sporting organisations, including the International Hockey Federation (FIH).

Hockey has been played in the Solomon Islands since the 1980s and even played in the very first Oceania Cup held in Papua New Guinea in 1981. However, lack of leadership, government instability and regular cyclones and earthquakes meant that hockey disappeared from the sporting landscape in the country.

The Oceania Hockey Federation paved the way for the successful reintroduction of the sport by engaging with the National Olympic Committee (NOC) and promoting the idea of a smaller game – Hockey5s.

After helping establish an efficient and professional governing body in the country, the Oceania Hockey Federation teamed up with FIH to facilitate this development through the world governing body's Targeted Assistance Programme (TAP).

One of the first main targets of the newly formed Solomon Island Hockey Federation was to enter a team into the Pacific Games in Papua New Guinea in July 2015. To achieve this, they strategically aligned themselves to an educational institute, Don Bosco College, where they introduced a group of male students to the game.

The College had a small concrete space between the classrooms that became the training and playing area. 14 players trained with nine selected to represent the Solomon Islands. One of the students became the Coach and another the Manager.

With a football background, the players were already athletic. They took to their new game quickly and during the Pacific Games excelled against some of the Oceania members. Their progress was clear as they reached the bronze medal game where they eventually lost to hosts Papua New Guinea.

14 months on and the sport has gone from strength to strength. Just recently the Federation held their first Secondary Schools Championships, with six boys and six girls teams competing. Four clubs have also started up and the Executive have built their own portable goals as they have to rotate matches onto whatever field they can find.

Women's participation has also been addressed. The Oceania Continental Development Officer, Gill Gemming, on her initial visit in 2014, identified a bowling green that was not utilized. Since then it has been converted into the centre for the women to play their Hockey5s.

As hockey has grown in popularity, volunteers have been recruited and trained to make the game sustainable. The FIH Academy Coach Education programmes were piloted there in December 2015 where 27 participants attended a four day workshop.

All the Pacific Games players attended and are now involved in coaching or umpiring. However, the most significant development was  that 15 of the participants were teachers, which bodes well for the 2016 School visit programme which will see their new hockey Development Officer introduce hockey to primary schools.

Taking up that role is Joseph Iniga, a local who coached the Pacific Games Team. Through the TAP funding, Joseph was also able to attend Oceania Cup in Stratford in October 2015, as the first part of his training. There he was one of eight participants in the FIH Educator's Programme.

Also in Stratford, 22 new Development Officers representing Australia, Fiji, New Zealand, Samoa, Solomon Islands, Tonga and Vanuatu were trained. It was also a great networking opportunity for these individuals as they shared ideas and discussed future plans with one another.

Tonga and Vanuatu are now ready to follow the same path with in country indigenous Development Officers. Through the TAP programmes and partners, it is hoped that the these new positions will be filled by May 2016.

This Oceania development is the latest success story from the FIH Targeted Assistance Programme. That global initiative is a key component of the FIH's Hockey Revolution - the 10 year strategy aimed at making hockey a global game that inspires the next generation.

One of the four big goals designed to achieve that ambition is to increase the degree of professionalism in the sport, therefore coach education and effective governing bodies will remain key tactics in delivering results in this area.

To find out how you can get involved in hockey in a Oceania country, click here.