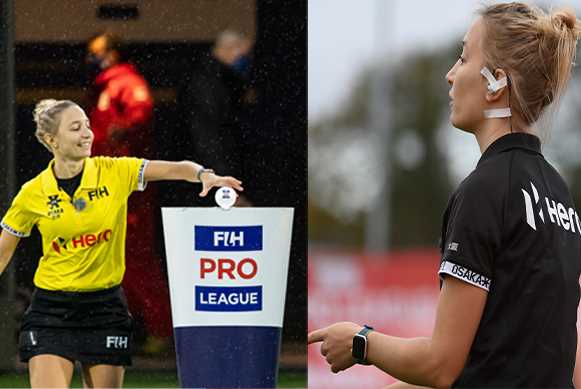 Small steps to the top

Celine Martin-Schmets joined us on Episode 5 of the Hockey Pod fresh from a weekend of FIH Hockey Pro League action. The Belgian umpire had been one of the team of officials taking charge of the Netherlands versus Germany fixtures and Martin-Schmets had been on field for both the women’s matches.

The model of professionalism on the pitch, Martin-Schmets is an affable, smiley character off it and her easy manner makes her an approachable umpire for players and coaches to talk to in post-match debriefs.

Martin-Schmets has moved rapidly up the umpiring ladder but, despite her talent for game management, she has yet to gain an appointment to the highest level of competition. As she explains, she came close to selection for the Olympic Games Tokyo 2020 but failed to make the final cut.

“At the beginning it was really hard because I was on the short list and I really wanted to go, even though I knew it would be a really difficult challenge. But I come from a country that has a lot of very good female umpires, particularly Laurine Delforge [FIH Umpire of the Year].”

Celine explains that Delforge has been a huge help when it came to acceptance of her not being selected for the Games and her fellow umpire has been supporting and mentoring her for future success.

“She is really inspiring and I know, from observing her, that I still have some steps to go through before I am ready for the top appointments.

“I will be taking appointments step by step to make improvements in my performance. There is the EuroHockey Championship in June and then every tournament after that provides yet more experience. There is the World Cup and then Olympic Games Paris 2024 to aim for, but we will see. I will focus on one event at a time.”

When it comes to working on aspects of her umpiring performance, one of the things that Martin-Schmets knows she can work on, no matter what else is happening at the time, is her fitness. It was a realisation that came to her in 2018 when she was appointed to the Women’s Champions Trophy in China, her most prestigious appointment to date.

“I was a good umpire at that point, but I wanted to be a great umpire. I realised that I needed to get better. As an umpire, you always want to be appointed for the gold medal matches and I wanted to know how I could get to that level. I asked Laurine and she said ‘get your fitness to the highest level you can, so your body is doing what it needs to do and your mind can stay focused on the game’.”

Since then, Martin-Schmets has made fitness one of her focus points. As she says, “during the pandemic, fitness and running was one of the few things you could do. It was one of my ways of keeping focused.”

She says her next target is to work on her body language. She admits that when she is under pressure, her body language tends to give her away. “This is a small thing but it is important to master,” she says.

With a full year of events, including the remaining FIH Hockey Pro League fixtures, the EuroHockey Championships and the packed Belgium club fixture list, the aspiring and inspiring umpire will have plenty of opportunity to make those steps to the big time.

Listen to the full podcast here.