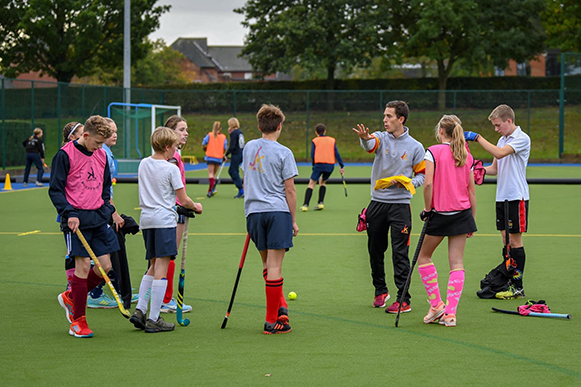 The latest in the series of FIH Academy webinars focused on the fascinating and complex area of goal-scoring. It turned out to be a topic that raised a serious amount of discussion and debate among the 16 participants – much to the delight of the presenters, Sam Rowe and Tsonaelo Pholo.

“We could still be having discussions about goal-scoring now,” says one of the course hosts, Sam Rowe, who was making his debut as a webinar host. One particular goal [Netherlands forward Kim Lammers scoring against New Zealand in the 2014 Women’s World Cup], caused a “furore” as the candidates debated whether the goal – a cheeky deflection through the player’s legs into the top corner - was outrageous skill or pure luck.

Rowe, who is Performance Analyst for Hockey Wales and top Belgium club Royal Antwerp, as well as hockey professional at Framingham College and a FIH Academy L2 Coach, presented the four hour long course alongside South African Tsoanelo Pholo, a FIH Academy Level 4 coach and FIH Academy Educator. He thoroughly enjoyed his first foray into webinar hosting and sees online courses as a natural partner to physical training in the future.

“I was blown away by the quality of the presentations [by the candidates],” says Rowe. “There was some really good detail, we challenged them, they challenged each other. It really was one of the best interactions I have seen on a webinar to date – and I have seen quite a few recently,” he adds wryly.

For Rowe, being asked to co-host the webinar was another step along his own coaching journey. He is keen to widen his reputation within the sport beyond the video tower and being asked to share his knowledge on this platform has provided an opportunity to do just that: “To suddenly realise you are reaching so many corners of the globe, with participants from four continents represented, that is such an experience,” he says.

The webinar followed a pattern set by previous FIH Academy events. Coach Pholo and Rowe presented for the first 45 minutes and then the group was split into four sub-groups and set a task, centred on a goal-scoring video clip. The groups reported back and then it was an in-depth, open discussion.

That final point was an important one for the hosts to consider. Course participants ranged from people who coached junior teams, to international coaches to players contemplating a coaching career. Making sure that the information was relevant for all levels of performance was key to the course’s success. The two hosts spent many hours prior to the course discussing the content and choosing relevant clips that would best spark debate and discussion.

The importance of being effective in the circle is something that Rowe’s own video analysis is highlighting. He has identified a trend towards more goals being scored from open play than penalty corners, particularly in the men’s game. And most of the goals from open play come when the attack is outnumbered by defence. “It is why coaching players to be effective in the circle is so key,” he says.

Reflecting back on the course, Rowe is delighted with the way that all the participants were engaged in the process. He sees the fact that six women were on the course as evidence that online courses are a way of increasing accessibility to a career in coaching.

“You can’t learn everything from a screen,” he says, “but this has been an incredible revolution in a short space of time. To be able to have this incredible menu of opportunity to discuss, challenge and learn from all parts of the world, it is fascinating and something that would be impossible to do face-to-face with the same reach. I am really grateful for Coach Pholo and Mike Joyce [Director of FIH Academy] for inviting me to take part.

"When Corona virus has passed it will be incredible to have this blend of face-to-face coaching and online courses.”

You can register for the FIH Academy's goalscoring workshop on 11th June 2020 by clicking here.