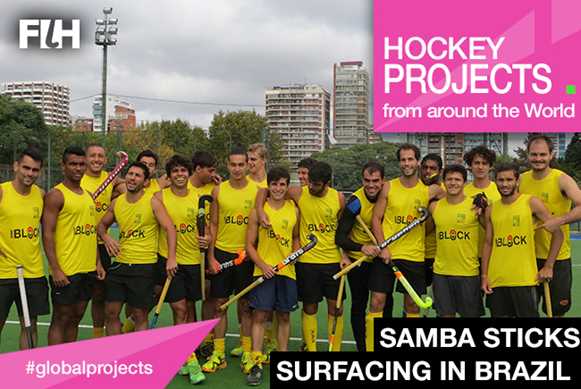 The question on hockey fans minds in the lead-up to the Rio Olympics is whether the host nation’s hockey team will provide one of those magical moments that the Olympics has a habit of producing. Can the team in yellow and green out-perform their higher ranked rivals to make hockey history in the Deodoro Olympic Park? With Brazil men ranked 32 in the world – with 14 being the next lowest ranking – a win will both send the home support into a frenzy of samba celebration and turn the hockey world on its head.

With just over two months to go before the 2016 Olympics burst into action, we caught up with the man who is leading hockey’s development in Brazil, Bruno Oliveira, the General Manager at the Brazilian Hockey Federation (CBHG).

Brazil men’s team qualified for the Olympics when they met the FIH criteria by finishing in fourth place at the 2015 Pan American Games. The women, who were set similar criteria, missed out on qualification at the same event.

“Both of our national teams have recently undergone great development and transformation, especially the men's team,” says Oliveira. “ Also, both national teams won an international tournament for the first time when they won the Pan American Challenge.

“We focused on winning a spot in the Olympic Games, with both of our national teams. Unfortunately the women's team did not reach the targets set by FIH, despite it's development, but the road that both national teams have come so far has been very important for promoting hockey in our country.”

And this is at the heart of the CBHG’s ambitions. Yes, the Confederation wants to prosper on the national stage but it also wants that exposure and any related success to translate into grassroots development and an appetite for the game at club level.

Hockey is currently played in five states across Brazil, explains Oliveira. These areas are Rio de Janeiro, São Paulo, Rio Grande do Sul, Santa Catarina and Paraná. In the past few years, hockey interest and participation has risen dramatically in these states and the aim now is to introduce the game in a further two states.

Oliveira explains that a partnership between the CBHG and the States Federations was signed to promote hockey in schools, clubs and universities. This promotion is done through hockey clinics and coaching courses. So far, the sport has been taken up by two public and two private universities and the Federation is working hard to promote hockey in schools. The main area of focus is upon schools in Rio de Janeiro, because there will be four FIH Quality Programme for Hockey Turf Global certified hockey fields available once the Olympic flame has moved on.

The national team are doing their bit to promote their sport. Both players and coaches run or participate in the coaching course and clinics held at the schools and universities and Oliveira says the players are becoming sports superstars in a country where this status is normally reserved for soccer.

“As our men's national team will be in Rio de Janeiro next month, we plan to take advantage of this to bring the young players near to the players of the national teams. We are beginning to create hockey idols and this is great.”

Oliveira and his staff are determined to make hockey a popular and sustainable sport in Brazil. Development has been supported by the government, the Brazilian Olympic Committee, the FIH and the International Olympic Committee via its Olympic Solidarity Programme, but now the CBHG is looking to build partnerships with private companies to continue the development.

Of course, just for the moment any grass roots development will be taking a backseat but, once the Olympic Games come to an end, the focus turns back to the long game. “In Rio, Brazil is going to face the best teams in the world for the first time. That is a huge challenge but we believe that our national team can put in a good performance in Rio. After that, our focus is on increasing the number of people involved with our sport, increasing the number of hockey clubs across the country and by achieving better results in the international competitions. Our main ambition is to bring hockey to a new level in Brazil.”

In raising the profile of the game and consequently attracting more players at each level, the development in Brazil is very much in line with the FIH's 10 year strategy – the Hockey Revolution – which aims to bring the game to millions of new fans.