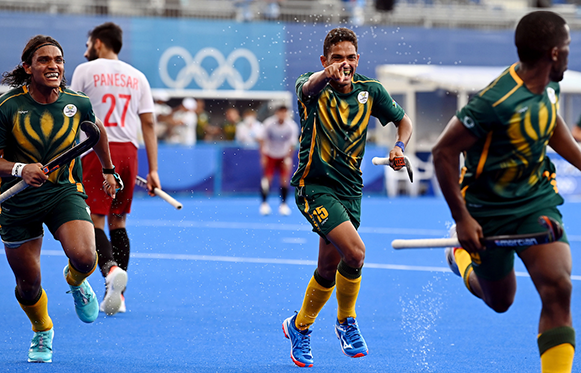 Following South Africa’s men’s team featuring in the top three of both the best match and best goal of 2021 fan vote, we chat to an attacker who played an instrumental role in those iconic moments from the Olympic Games Tokyo 2020.

Dayaan Cassiem was without question one of the breakout stars of the competition in Japan, attracting praise from opposition players and admiration from fans across the world.

His stunning solo goal against eventual gold medallists Belgium certainly turned heads, with the then 22-year-old justifying the subsequent hype by playing a starring role as South Africa claimed a magnificent 4-3 pool phase victory over Germany, a team many considered to be genuine title contenders.

The winning goal against Die Honamas was scored by Dayaan’s younger brother Mustaphaa, with the Cassiem siblings being symbolic of a promising future for South Africa’s men’s team.

In a special video interview with FIH, Dayaan Cassiem reflects on those wonderful moments from his debut Olympics as well as looking ahead to what promises to be a fantastic 2022 in which his South Africa team will compete in the FIH Hockey Pro League.

His superb individual goal against eventual gold medallists Belgium at the Olympic Games Tokyo 2020 being voted by the fans as the 3rd best of 2021.

Dayaan Cassiem: “In the game before, against the Netherlands, we were three-all and I missed an opportunity to make it 4-3. I hit the post. I thought to myself, I cannot let this get to me and I must move onto the next game. I said to myself that I just had to keep playing my game, and I think luckily enough against Belgium [I got the break]. Tyson Dlungwana, our defender, passed the ball through and luckily enough, I touch the ball past the world’s best defender, Arthur Van Doren. It is like my trademark to do it, especially in tournaments or for my club in Germany, but its perhaps bot normal for strikers to flick the ball [when shooting]. It is something that I train a lot at doing, and luckily enough I got to beat one of the best keepers in the world, Vincent Vanasch, with a flick over his shoulder.”

His memories of South Africa’s superb 4-3 win over Germany in Tokyo, a match voted by the fans as the second best of 2021.
Dayaan Cassiem: “Way before the Olympics, we set ourselves goals and we thought we could pull off an upset against one of the top teams. Of course, our pool was the ‘pool of death’, with the Netherlands, Germany, Great Britain, Belgium – all the top teams, and South Africa were ranked 15th in the world. If you look at the other teams, they are all 1-10 [in the rankings]. Luckily enough we got to beat Germany. I think the nice thing is that we have lot of guys playing in Germany, like Nicolas Spooner, myself, Ntuli Bile and my brother. I think we brought all that information about the way they play and took it out onto the field. Yeah, we made a good upset at the Olympics!”

On being proud of South Africa’s performances in Tokyo despite the challenges faced by the team build-up to the competition, as alluded to by defender Austin Smith in an interview with FIH ahead of the Games.
Dayaan Cassiem: “100 percent. As Austin said, we didn’t have any training sessions. We met two weeks before the Olympics. Of course, we are not financially stable so for us to move around [the country] it is a bit tough – we have to cough up our own money out of our own pockets. So, I think with all that and the preparation we had, we did really well. I think that if we had beaten one other top team we would have been in a quarter-final.”

On how 2022 promises to be an exciting one for his South Africa team, especially with stepping into this season’s FIH Hockey Pro League.
Dayaan Cassiem: “For South African hockey to be involved in the Pro League, I think that is an awesome opportunity and gives us more opportunity to play more games, which we are struggling with at the moment. We don’t play enough international games, so it is really tough for us to compete. But after the Olympics performance, I think we have a good opportunity to see what happens in 2022.”

“I think it is really cool initiative for FIH, but also for South African hockey. It is the first time that this South Africa team has been announced to play in the Pro League; it is not something that always happens. I think after our hard work at the Olympics, it has paid off – at least we get to play in the Pro League! I think that is something we always wanted to achieve; it was one of our goals prior the Olympics. As a team, we are really excited, keen to play against the big boys!”