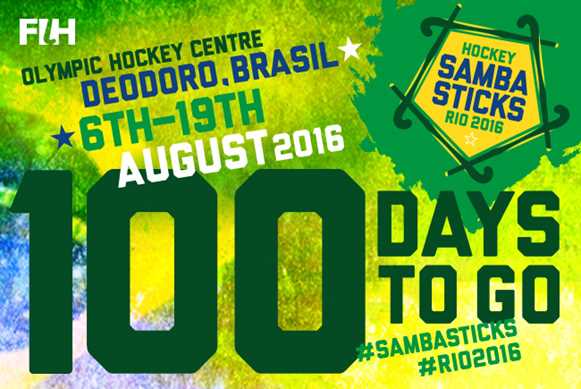 To mark 100 days until the Rio 2016 Olympic Games begin,the International Hockey Federation (FIH) has confirmed the official match schedules for the men’s and women’s hockey events.


Running from 6-19 August at Deodoro Olympic Park in Rio De Janiero, Brazil, the events will feature 12 men’s and 12 women’s international hockey teams who qualified through the Hockey World League and Continental Championships.

Two pitches will host both events and, for the first time in an Olympic hockey competition, Quarter-Finals will be played. With no classification games taking place, only the top four teams from each pool will qualify for the knock-out stages.

The winners of the Quarter-Finals will qualify for the Semi-Finals which will determine who will play in the gold and bronze medal matches. The men’s medal matches are scheduled for Thursday 18 August and the women’s the following day, on Friday 19 August.

The hockey schedules were agreed by FIH, Rio 2016, Olympic Broadcast Services (OBS) and the International Olympic Committee (IOC). The FIH Competitions Committee also played a crucial role in the development of the schedule along with representatives from all continents and the FIH Athletes’ Committee.

The men get the Olympics under way in some style as reigning European champions Netherlands, silver medallists at London 2012, take on Pan American champions Argentina, who won the bronze medals at the Hockey World Cup two years ago.

That match begins at 10:00 (all times local) on Saturday 6 August. Shortly afterwards 2014 Asian Games champions India take on European bronze medallists Ireland in the second game of that day - Ireland being represented in the hockey event for the first time since hockey made its debut at the Olympic Games in London in 1908.

Another highlight of the men’s schedule will be a rerun of last year’s Hockey World League Final between Australia and Belgium on Tuesday 9 August. Reigning World Cup and World League champions Australia, currently ranked top of the FIH World Rankings, will be hoping to finish amongst the medals again having won bronze at the London Games four years ago.

The last day of the men’s pool matches, Friday 12 August, will see the two teams who finished above Australia’s Kookaburras at London 2012 go head to head as defending Olympic champions Germany take on the Netherlands.

The women’s event also begins with a mouth-watering match. Reigning Hockey World League champions Argentina, who picked up the silver medals at London 2012, will look to avenge their loss to USA in the Pan American Games final last summer, with their match starting at 17:00 on Saturday 6 August.

London 2012 gold medallists and reigning World Cup champions Netherlands begin their title defence against Spain the following day while another rivalry sure to excite fans will be a rerun of the 2014 Hockey Champions Trophy Final between then winners Argentina, now ranked second in the FIH World Rankings, and Australia, ranked third, on Thursday 11 August.

Great Britain won the bronze medals in front of their home fans at the last Olympics and will include a number of athletes who were crowned European champions whilst representing England last summer. They begin their campaign against southern hemisphere rivals Australia on Saturday 6 August.

China meanwhile will be looking to reverse their 2014 Asian Games loss to rivals Korea on Friday 12 August before six women’s games conclude the pool stages of the events, including a match between 2015 Hockey World League Final runners up New Zealand and Beijing 2008 Olympic silver medallists China on Saturday 13 August.

Speaking about the schedules, Michael Green, Chair of the FIH Athletes’ Committee, said: “The Olympic schedule is a complex jigsaw reflecting the desire to keep an equitable spread of times and pitch allocation for all teams across both genders alongside the specific needs of the global broadcasters. We believe this schedule will provide players, viewers and fans alike with an exciting Olympic hockey event to showcase and promote our sport across the world.”

Make sure you don’t miss out on any of the action in the Deodoro by securing your Rio 2016 Olympic Games hockey tickets now by clicking here.

Further information about the Rio hockey events can be found here.

Competition Format
The hockey competition at the Rio 2016 Olympic Games comprises women's and men's events, with the same format and rules for both. In the preliminary round 12 teams are divided into two pools of six teams. Each team plays every other team in its pool.

The two pools were determined by the FIH protocol on pool composition based on the FIH World Ranking as at 1 January 2016 as follows: