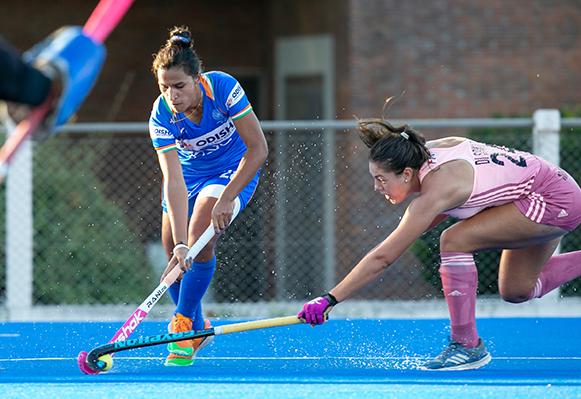 At a time when very little international sport is taking place due to the ongoing battle against the COVID-19 global health pandemic, a series of friendly matches between hosts Argentina and visitors India – which will be live streamed on the Watch.Hockey App*, more details of which can be found below – feels like a positive step forward towards a possible return to normality. Significantly, it also provides a wonderful opportunity for two talented and ambitious teams to progress their preparations for what is without question their most important competition of the year: July’s Olympic Games in Tokyo, Japan.

India – who in Tokyo will compete in Pool A alongside reigning world champions the Netherlands, reigning Olympic gold medallists Great Britain, Rio 2016 bronze medallists Germany, 2018 World Cup silver medallists Ireland and African continental champions South Africa – have been following strict health protocols since arriving in Argentina for their eight-match tour, their first away fixtures for almost 12 months. At the time of writing, India head coach Sjoerd Marijne has witnessed his charges play a total of four games at Cenard in Buenos Aires, drawing twice Argentina’s Under-21 team before two narrow defeats against the Argentina B team.

"In the third and fourth matches, Argentina played with an experienced side that had recently won against Australia 'A' and this was a perfect platform for our players to adapt to their level”, said coach Marijne. “In the four matches [played so far], all the players in the Indian core group got a chance to show their best. In the upcoming four matches [against Las Leonas] we will field our best side to see what we can create against the World No.2 team. There have been good learnings from these four matches, and I want to see how our main team performs against them,"

On 26th, 28th, 30th and 31st of January, Marijne’s team have the opportunity to test themselves against one of the very best sides on the planet. The contests against Las Leonas – who sit second in the FIH World Rankings compared to India’s ninth position – will certainly provide Marijne with a good indication about the level at which India is currently operating at, as well as providing useful insight into the steps that may need to be taken in the crucial months ahead leading into Tokyo 2020.

The fixtures are also hugely beneficial to Argentina coach Carlos Retegui, the man currently overseeing both the women’s and men’s international teams. It is a much-needed opportunity for Argentina’s charismatic tactician to see a wide range of his athletes in action against a skilful and unpredictable India team. Retegui will be determined to learn as much about his talent pool as possible, especially in the light of the recent retirement of legendary attacker Carla Rebecchi.

For those ‘fringe’ players that played for the Under-21s and Argentina B teams, the India matches provided a chance to impress the coach and stake their claim to be selected for Tokyo, where Las Leonas have their sights set firmly on the target of finally securing that elusive Olympic gold medal following silvers at the Sydney 2000 and London 2012 Olympiads.

In Tokyo, Argentina will compete in Pool B against fellow FIH Hockey Pro League giants Australia, New Zealand and China, as well as World Cup 2018 bronze medallists Spain and Japan, the hosts and the continental champions of Asia.

Can Las Leonas follow the glorious success of their men’s team at Rio 2016 by winning gold in Japan? With six months to go, no stone will be left unturned in the quest to turn that dream into reality.

Upcoming fixtures
To be live streamed on the Watch.Hockey App*

*In Argentina, the matches are available on the CAH YouTube channel.